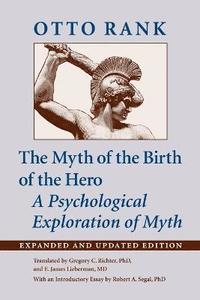 The Myth of the Birth of the Hero

A Psychological Exploration of Myth

av Otto Rank
Häftad Engelska, 2015-11-01
299
Köp
Spara som favorit
Skickas inom 10-15 vardagar.
Fri frakt inom Sverige för privatpersoner.
Finns även som
Visa alla 1 format & utgåvor
First published in German in 1909, Otto Rank's original The Myth of the Birth of the Hero offered psychoanalytical interpretations of mythological stories as a means of understanding the human psyche. Like his mentor Sigmund Freud, Rank compared the myths of such figures as Oedipus, Moses, and Sargon with common dreams, seeing in both a symbolic fulfillment of repressed desire. In a new edition published thirteen years after the original, Rank doubled the size of his seminal work, incorporating new discoveries in psychoanalysis, mythology, and ethnology. This expanded and updated edition has been eloquently translated by Gregory C. Richter and E. James Lieberman and includes an introductory essay by Robert A. Segal as well as Otto Rank's 1914 essay "The Play in Hamlet."
Visa hela texten

"Nearly all prominent civilized nations, including Babylonians and Egyptians, Hebrews and Indians, Persians, Greeks and Romans, as well as Germanic peoples and others, have left us literatures in which, early on, they glorify national heroes--mythical princes and kings, and founders of religions, dynasties, empires, and cities--in many poetic tales and legends. The history of the birth and youth of these supermen came to be especially invested with fantastic features, which in different nations, though widely separated by space and entirely independent of each other, present a baffling similarity or, in part, a literal correspondence...The ultimate problem is not whence and how the material reached a certain people. That question is, Where did it come from to begin with?"

Otto Rank (1884-1939), one of the most important figures in psychoanalysis, was the author of The Incest Theme in Literature and Legend: Fundamentals of a Psychology of Literary Creation and Psychology and the Soul: A Study of the Origin, Conceptual Evolution, and Nature of the Soul. Gregory C. Richter, PhD, is a professor of German and linguistics at Truman State University. E. James Lieberman, MD, is professor emeritus of clinical psychiatry and behavioral sciences at George Washington University. Robert A. Segal, PhD, is the Sixth Century Chair in Religious Studies at the University of Aberdeen.