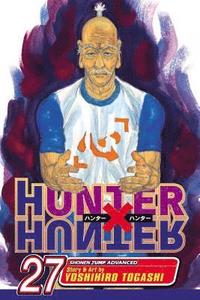 av Yoshihiro Togashi
Häftad Engelska, 2011-03-01
199
Bevaka
Spara som favorit
Tillfälligt slut – klicka "Bevaka" för att få ett mejl så fort boken går att köpa igen.
The Hunters are getting beaten further and further into a corner by the powerful Chimera Ant King's Royal Guards. With teamwork on their side, they just may be able to overcome these impossible odds. But when they make sacrifices to save each other, it just might cost them the bigger battle at hand!
Visa hela texten

Yoshihiro Togashi's manga career began in 1986 at the age of 20, when he won the coveted Osamu Tezuka Award for new manga artists. He debuted in the Japanese Weekly Shonen Jump magazine in 1989 with the romantic comedy Tende ShAwaru Cupid. From 1990 to 1994 he wrote and drew the hit manga YuYu Hakusho, which was followed by the dark comedy science-fiction series Level E and the adventure series Hunter x Hunter. In 1999 he married the manga artist Naoko Takeuchi.