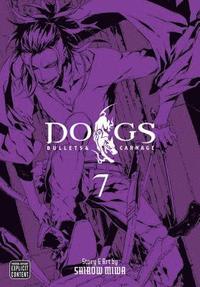 av Shirow Miwa
Häftad Engelska, 2012-12-18
179
Köp
Spara som favorit
Skickas inom 5-8 vardagar.
Fri frakt inom Sverige för privatpersoner.
When Naoto and Heine confront Magato and Campanella Fruhling together for the first time, the blades and bullets fly - but the damage wrought by a shocking revelation could prove even greater. What will Naoto do when she learns the deeply buried truths behind the tragic incident that has defined her life? Meanwhile, as Director Neubaten moves to gain control of the Below, Angelika Einsturzen finally emerges from the dark...
Visa hela texten

Shirow Miwa debuted in UltraJump magazine in 1999 with the short series Black Mind. His next series, Dogs, published in the magazine from 2000 to 2001, instantly became a popular success. He returned in 2005 with Dogs: Bullets & Carnage, which is currently running in UltraJump. Miwa also creates illustrations for books, music videos and magazines, and produces doujinshi (independent comics) under the circle name m.m.m.WORKS. His website is http://mmm-gee.net.