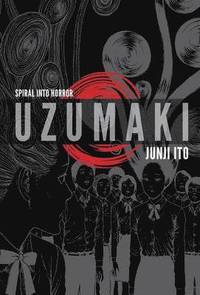 av Junji Ito
(15 röster)
Inbunden Engelska, 2013-11-21
259
Köp
Spara som favorit
Skickas inom 5-8 vardagar.
Gratis frakt inom Sverige över 159 kr för privatpersoner.
Kurozu-cho, a small fogbound town on the coast of Japan, is cursed. According to Shuichi Saito, the withdrawn boyfriend of teenager Kirie Goshima, their town is haunted not by a person or being but by a pattern: uzumaki, the spiral, the hypnotic secret shape of the world. It manifests itself in everything from seashells and whirlpools in water to the spiral marks on people's bodies, the insane obsessions of Shuichi's father and the voice from the cochlea in our inner ear. As the madness spreads, the inhabitants of Kurozu-cho are pulled ever deeper into a whirlpool from which there is no return!
Visa hela texten

Junji Ito made his professional manga debut in 1987 and since then has gone on to be recognized as one of the greatest contemporary artists working in the horror genre. His titles include Tomie and Uzumaki, which have been adapted into live-action films; Gyo, which was adapted into an animated film; and his short story collections Fragments of Horror, Shiver and Frankenstein, all of which are available from VIZ Media. Ito's influences include classic horror manga artists Kazuo Umezu and Hideshi Hino, as well as authors Yasutaka Tsutsui and H.P. Lovecraft.