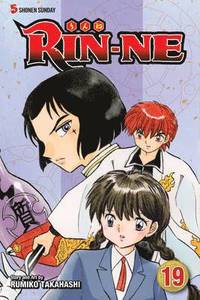 av Rumiko Takahashi
Häftad Engelska, 2015-11-10
139
Köp
Spara som favorit
Skickas inom 5-8 vardagar.
Fri frakt inom Sverige över 159 kr för privatpersoner.
Ever since a strange encounter when she was a child, Sakura Mamiya has had the power to see ghosts. Now in high school, she just wishes the ghosts would leave her alone! When her mysterious classmate Rinne Rokudo shows up, Sakura finds herself following him into the amazing world between life and death! The devil Masato was once Rinne's classmate in Shinigami elementary school, and somehow he still holds a grudge against Rinne. What happened between them in the past? When strange things happen on Valentine's Day and at the Doll Festival, poor Rinne never seems to have any free time!
Visa hela texten

The spotlight on Rumiko Takahashi's career began in 1978 when she won an honorable mention in Shogakukan's annual New Comic Artist Contest for Those Selfish Aliens. Later that same year, her boy-meets-alien comedy series, Urusei Yatsura, was serialized in Weekly Shonen Sunday. This phenomenally successful manga series was adapted into anime format and spawned a TV series and half a dozen theatrical-release movies, all incredibly popular in their own right. Takahashi followed up the success of her debut series with one blockbuster hit after another--Maison Ikkoku ran from 1980 to 1987, Ranma 1/2 from 1987 to 1996, and Inuyasha from 1996 to 2008. Other notable works include Mermaid Saga, Rumic Theater, and One-Pound Gospel. Takahashi won the Shogakukan Manga Award twice in her career, once for Urusei Yatsura in 1981 and the second time for Inuyasha in 2002. A majority of the Takahashi canon has been adapted into other media such as anime, live-action TV series, and film.