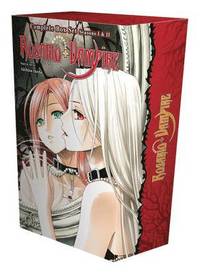 av Akihisa Ikeda
(3 röster)
Häftad Engelska, 2015-11-19
1329
Bevaka
Spara som favorit
Tillfälligt slut – klicka "Bevaka" för att få ett mejl så fort boken går att köpa igen.
The complete best-selling Rosario+Vampire series is now available in a value-priced box set! This box set includes all 24 volumes full of monstrous action; horror; fun and romance. Plus an exclusive full-color mini-comic previously unreleased in the English editions. Average human teenage boy Tsukune accidentally enrolls at a boarding school for monsters-no, not jocks and popular kids, but bona fide werewolves, witches, and unnameables out of his wildest nightmares! On the plus side, all the girls have a monster crush on him. Especially far-from-average cute vampire Moka. On the O-negative side, she also has a burning, unquenchable thirst for his blood... Now, can Tsukune and his unlikely group of friends and rivals save humanity from the evil members of monsterkind?
Visa hela texten

Akihisa Ikeda was born in 1976 in Miyazaki. He debuted as a mangaka with the four-volume magical warrior fantasy series Kiruto in 2002, which was serialized in Monthly Shonen Jump. Rosario+Vampire debuted in Monthly Shonen Jump in March of 2004 and is continuing in the new magazine Jump Square (Jump SQ) as Rosario+Vampire, Season II. In Japan, Rosario+Vampire is also available as a drama CD. In 2008, the story was first released as an anime. Season II is also available as an anime now. And in Japan, there is a Nintendo DS game based on the series.