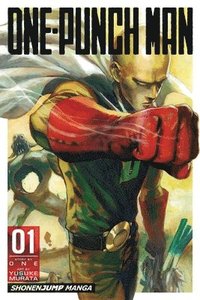 av One
(9 röster)  |  Läs 2 recensioner
Häftad Engelska, 2015-09-24
95
Bevaka
Spara som favorit
Tillfälligt slut – klicka "Bevaka" för att få ett mejl så fort boken går att köpa igen.
Nothing about Saitama passes the eyeball test when it comes to superheroes, from his lifeless expression to his bald head to his unimpressive physique. However, this average-looking guy has a not-so-average problem - he just can't seem to find an opponent strong enough to take on! Every time a promising villain appears, he beats the snot out of 'em with one punch! Can Saitama finally find an opponent who can go toe-to-toe with him and give his life some meaning? Or is he doomed to a life of superpowered boredom?
Visa hela texten

Manga creator ONE began One-Punch Man as a webcomic, which quickly went viral, garnering over 10 million hits. In addition to One-Punch Man, ONE writes and draws the series Mob Psycho 100 and Makai no Ossan. A highly decorated and skilled artist best known for his work on Eyeshield 21, Yusuke Murata won the 122nd Hop Step Award (1995) for Partner and placed second in the 51st Akatsuka Award (1998) for Samui Hanashi.