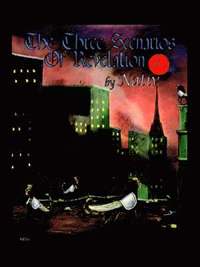 av Nativ
Häftad Engelska, 2006-09-01
339
Köp
Spara som favorit
Skickas inom 10-15 vardagar.
Gratis frakt inom Sverige över 159 kr för privatpersoner.
The book's focus, from which the title is derived, is taken from Revelation 11:18, and opens with "The Wrath of God," continues with "The Judgment of Mankind" and closes with "The Reward of the Saints." A Jewish, Biblical Scholar, Nativ brings a unique, often startling perspective to the Book of Revelation. Basing his theories in Hebraic concepts, not doctrine or dogma, Nativ takes the reader on an exciting, step-by step journey through the Hebrew texts, the original language of the Bible, and through painstaking analysis, breathes new life into the words of the Old Testament prophets, the apostles, and Jesus. Take for example, the word "Armageddon." Long interpreted as the ultimate battle between good and evil, Nativ uses his extensive Hebrew knowledge to show it is a place, not a battle, and introduces the ancient Hebrew concept of a "place of refuge" as proof. Should Nativ be correct, not only will he change the theology, but dictionary definitions as well. Equally startling is his discussion of Revelation, Chapter Nine, regarding the opening of the bottomless pit and the release of the awesome creatures within. Nativ not only explains what they are, their origins and their purpose, but, most surprising, the creatures' present location, as they await the ending of the Age. Perhaps most controversial of all is Nativ's answer to the long-asked question regarding the identity of the "Beast" and the meaning of the number "666." Not only will the reader be dumbfounded by the simplicity of Nativ's answer, but horrified by the proximity. Nativ is not dogmatic. He does not expect everyone to agree with his study's conclusions, but instead challenges the reader to prove him biblically incorrect. Neither prophet nor the recipient of a great revelation from God, Nativ's only claim is the wisdom from God to unveil the meaning of the Book of Revelation in all its complexities.
Visa hela texten