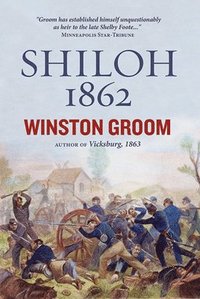 The First Great and Terrible Battle of the Civil War

av Winston Groom
Häftad Engelska, 2013-11-05
279
Köp
Spara som favorit
Skickas inom 3-6 vardagar.
Fri frakt inom Sverige för privatpersoner.
Finns även som
Visa alla 1 format & utgåvor
A main selection in History Book-of-the-Month Club and alternate selection in Military Book-of-the-Month Club. In the spring of 1862, many Americans still believed that the Civil War, "would be over by Christmas." The previous summer in Virginia, Bull Run, with nearly 5,000 casualties, had been shocking, but suddenly came word from a far away place in the wildernesses of Southwest Tennessee of an appalling battle costing 23,000 casualties, most of them during a single day. It was more than had resulted from the entire American Revolution. As author Winston Groom reveals in this dramatic, heart-rending account, the Battle of Shiloh would singlehandedly change the psyche of the military, politicians, and American people--North and South--about what they had unleashed by creating a Civil War. In this gripping telling of the first "great and terrible" battle of the Civil War, Groom describes the dramatic events of April 6 and 7, 1862, when a bold surprise attack on Ulysses S. Grant's encamped troops and the bloody battle that ensued would alter the timbre of the war. The Southerners struck at dawn on April 6th, and Groom vividly recounts the battle that raged for two days over the densely wooded and poorly mapped terrain. Driven back on the first day, Grant regrouped and mounted a fierce attack the second, and aided by the timely arrival of reinforcements managed to salvage an encouraging victory for the Federals. Groom's deft prose reveals how the bitter fighting would test the mettle of the motley soldiers assembled on both sides, and offer a rehabilitation of sorts for Union General William Sherman, who would go on from the victory at Shiloh to become one of the great generals of the war. But perhaps the most alarming outcome, Groom poignantly reveals, was the realization that for all its horror, the Battle of Shiloh had solved nothing, gained nothing, proved nothing, and the thousands of maimed and slain were merely wretched symbols of things to come. With a novelist's eye for telling and a historian's passion for detail, context, and meaning, Groom brings the key characters and moments of battle to life. Shiloh is an epic tale, deftly told by a masterful storyteller.
Visa hela texten

"Groom has given the Battle of Shiloh the mega attention that it deserves by writing a book with the storytelling appeal of fiction but solidly backed with fact.... This is a book that will stay with you for a very long time." -The Washington Post "Groom enhances his solid reputation as a writer of general audience military history with this narrative of the Civil War's first major battle in the west." -Publisher's Weekly "This thrilling narrative account of Shiloh from the bestselling author of Forest Gump, is a vivid portrayal of key players and epic moments that changed America's understanding of the war." -Publishers Weekly Top 10: History and Military History "Stirring Civil War history from the author of Forest Gump....The emphasis on the human element gives the book a power that sets it apart from most military histories." -Kirkus [Starred Review] "Including pertinent military detail about weapons and organization, Groom's compositional acumen makes Shiloh move quickly, vividly, graphically, and perfectly for armchair buff and battlefield visitor alike." -Booklist "Groom's gripping narrative is full of absorbing firsthand accounts from drummer boys, officers and enlisted men, nurses, and civilians...A provocatively rendered and persuasively argued study that demands a central place in Civil War historiography." -Library Journal (Starred Review)

WINSTON GROOM is the author of 14 previous books of nonfiction and fiction, including Shiloh, 1862; Vicksburg, 1863; Patriotic Fire; Shrouds of Glory; Forrest Gump; and Conversations With the enemy (with Duncan Spencer), which was a Pulitzer Prize finalist.