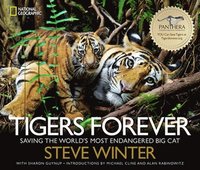 av Steve Winter, Sharon Guynup
(5 röster)
Inbunden Engelska, 2009-11-11
349
Köp
Spara som favorit
Specialorder (osäker tillgång). Skickas inom 11-20 vardagar.
Fri frakt inom Sverige för privatpersoner.
Kan tyvärr inte längre levereras innan jul.
Tigers are in trouble, and National Geographic photographer Steve Winter is on a one-man mission to address the plight of this magnificent cat - while there's still time. Together with Panthera, the world's largest nonprofit organization dedicated to saving big cats, and its Tigers Initiative, Winter reveals a decade worth of stunning images and stories of tigers in their world. In Tigers Forever, readers follow Winter through Myanmar's leech-infested jungles in search of tigers; into the forbidden realm of poachers in Sumatra; and witness the breathtaking intimacy between a tiger mother and her cub. Winter's gripping images, along with co-author Sharon Guynup's eloquent prose, tell the dramatic story of the tiger's fight for survival, and the lengths to which one man would go to bring that story to the world. Above all else, Tigers Forever reveals the tiger itself: elusive, majestic, ferocious, powerful, mysterious-and in desperate need of our help to survive.
Visa hela texten

"A monumental achievement in prose and images. The book is so riveting--nothing short of a hymn about the most endangered of all the big cats--that no reader could conceive of a world without them."--Tom Lovejoy, conservation biologist "Vivid descriptions and imagery...retell a tale from deep within the jungle." --Public Library Of Science "Raise[s] an alarm about the state of this imperiled species ." -WhoWhatWhy.com "Yes, photographer Steve Winter captures the sheer awe, beauty and power of one of the Earth's most majestic creatures....That's an understatement. But what adds to the book's obvious visual appeal is how Winter and freelance writer Sharon Guynup...get to the heart of what all great journalism is about: Why it matters."--TOM HENRY, environment writer, The Toledo Blade "If you read only one book about species on the verge of extinction today, this is the one to read. Steve Winter's gorgeous photos of majestic tigers, coupled with Sharon Guynup's moving stories of why they are declining tells it all. We learn about the men and women dedicated to protecting the 3,500 tigers left in the wild and what we can do to help. Winter manages to capture the very essence of tiger in his stunning photographs. Beautiful book in every way." Jane Alexander, actor and conservationist

STEVE WINTER is a renowned wildlife photographer who began shooting for National Geographic in 1991 and has produced stories for GEO, Time, Newsweek, Fortune, Natural History, Audubon, BusinessWeek, Scientific American, and Stern, among other publications. He has been recognized with numerous international awards, including first place in the 2014 World Press Photo's nature story category and was honored in 2012 as BBC Wildlife Photojournalist of the Year. SHARON GUYNUP writes on science, wildlife conservation, and environmental issues. Her work has appeared in publications including Smithsonian, Scientific American, The Huffington Post, the Boston Globe, BBC Wildlife, and Audubon. She launched the State of the Wild book series analyzing the status of the world's wildlife and wild lands, published by Island Press, in 2006.