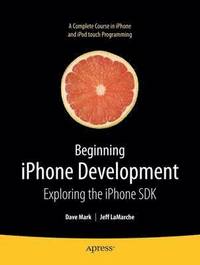 av Jeff Lamarche, David Mark
Häftad Engelska, 2009-04-28
349
Köp
Spara som favorit
Finns även som
Visa alla 1 format & utgåvor
Are you a programmer looking for a new challenge? Does the thought of building your very own iPhone app make your heart race and your pulse quicken? If so, then Beginning iPhone Development is just the book for you. Assuming only a minimal working knowledge of Objective-C, and written in a friendly, easy-to-follow style, Beginning iPhone Development offers a complete soup-to-nuts course in iPhone and iPod Touch programming. The book starts with the basics, walking you through the process of downloading and installing Apple's free iPhone software development kit, then stepping you though the creation of your first simple iPhone application. You'll move on from there, mastering all the iPhone interface elements that you've come to know and love, such as buttons, switches, pickers, toolbars, sliders, etc. You'll master a variety of design patterns, from the simplest single view to complex hierarchical drill-downs. You'll master the art of table-building and learn how to save your data using the iPhone file system. You'll also learn how to save and retrieve your data using SQLite, iPhone's built-in database management system. You'll learn how to draw using Quartz 2D and OpenGL ES. You'll add multi-touch gesture support (pinches and swipes) to your applications, and work with the Camera, photo library, and Accelerometer. You'll master application preferences, learn how to localize your apps into other languages, and so much more. Apple's iPhone SDK, this book, and your imagination are all you'll need to start building your very own best-selling iPhone applications.
Visa hela texten

A table of contents is not available for this title.