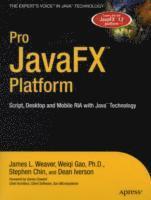 This book contains the following:

Visit projavafx.com for more resources and information from the authors.

General audience: application developers, graphic designers, and IT decision makers. Not only will this book contain technical information for developers and designers, it will build a compelling case for choosing JavaFX for web applications and Rich Internet Applications.

Jim Weaver is an author, speaker, teacher, and developer in rich Internet application technologies such as JavaFX, and may be contacted at jim.weaver@javafxpert.com.