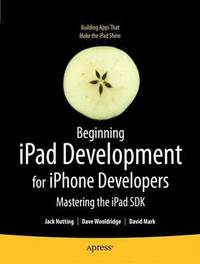 av Jack Nutting, David Mark, Dave Wooldridge
Häftad Engelska, 2010-08-05
349
Köp
Spara som favorit
Its in magazines and newspapers, its on television and radio, its on buses and billboards and pretty much everywhere you look. The iPad is thetouchscreen tablet from Apple, representing the next generation of mobile computing. Packed with dozens of new features, the iOS 3.2 SDK enables you to build sophisticated, desktop-quality apps for this exciting new platform. Every iPhone and iPod touch app developer looking to take the next step and move into the iPad arena will want to read this book from cover to cover.

Beginning iPad Development for iPhone Developers: Mastering the iPad SDK has all the answers, and youll find them presented with the same easy-to-follow style and thorough coverage you've come to expect from titles like Beginning iPhone 3 Developmenteverything an aspiring iPad developer needs to know to create great apps.

Best-selling authors Jack Nutting, Dave Wooldridge, and Dave Mark show iPhone developers how to master all of the iPad-exclusive frameworks and features, which are explained, demonstrated in action, and put through their paces in this comprehensive programming guide. You'll get a detailed understanding of the new feature set and gain every possible advantage in the iTunes App Store.

This book is for all iPhone app developers who want to leverage their skills to create professional apps for the iPad. It includes extensive example projects and the complete source code for Dudel, a full-fledged drawing app for the iPad.

Developing iOS 4 Apps?
Since many of the new features in iOS 3.2 are also present in iOS 4, this is one of the first books available in print that extensively covers several of the new APIs that iPhone developers are also eager to learn for creating iOS 4-optimized apps.

Jack Nutting has been using Cocoa since the olden days, long before it was even called Cocoa. He has used Cocoa and its predecessors to develop software for a wide range of industries and applications, including gaming, graphic design, online digital distribution, telecommunications, finance, publishing, and travel. When he is not working on Mac or iOS projects, he is developing web applications with Ruby on Rails. Nutting is a passionate proponent of Objective-C and the Cocoa frameworks. At the drop of a hat, he will speak at length on the virtues of dynamic dispatch and run time class manipulations to anyone who will listen (and even to some who won t). Nutting is the primary author of Learn Cocoa on the Mac (Apress, 2010) and Beginning iPad Development for iPhone Developers (Apress, 2010). He blogs from time to time at Nuthole.com.

11. Supporting both iPhone and iPad in one app

13. Integrating iPad with other devices