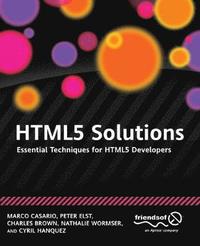 av Marco Casario, Peter Elst, Charles Brown, Nathalie Wormser, Cyril Hanquez
Häftad Engelska, 2011-06-27
399
Köp
Spara som favorit
Skickas inom 5-8 vardagar.
Fri frakt inom Sverige för privatpersoner.
HTML5 brings the biggest changes that HTML has seen in years. Web designers and developers now have a whole host of new techniques up their sleeves, from displaying video and audio natively in HTML, to creating realtime graphics directly onto a web page without the need for a plugin. But all of these new technologies bring more tags to learn and more avenues for things to go wrong. HTML5 Solutions provides a collection of solutions to all of the most common HTML5 problems. Every solution contains sample code that is production ready and can be applied to any project.


Who this book is for

Marco Casario is one of the most dynamic developers and consultants in the Adobe world. He has been passionate about informatics since he was little more than a child, and used to program games in Basic for Commodore 64 before dedicating himself, while still very young, to innovative projects for the web using Flash and Director (as far back as versions 3 and 5). In 2001, he began to collaborate with Macromedia Italia. Since that year, he has produced and headed a long series of presentations, conferences and articles, which you can find listed in detail in his blog, RIAvolutionize the Web (Casario.blogs.com), which is receiving several thousands of unique visitors every day. In 2005, Marco founded Comtaste (Comtaste.com), a company dedicated to exploring new frontiers in rich Internet applications and the convergence between the web and the world of mobile devices; MobyMobile (MobyMobile.com) and YouThru (YouThru.com) are representative of their work. Marco is the is founder of the biggest worldwide Flash Lite User Group (groups.yahoo.com/group/FlashLite) and of AugItaly.com, a reference point for the Italian community of Adobe users, for which he carries out the role of channel manager for the section dedicated to Flex (AugItaly.com/FlexGala.) Marco is busy working on the development (in Flex) of a very ambitious project concerning bank counters at European level, and in various consulting and Flex and Flash Media Server training activities for the realisation of rich Internet applications on behalf of buyers of the calibre of Capgemini, IBM partners, and Adobe Systems Software Ireland, Ltd.