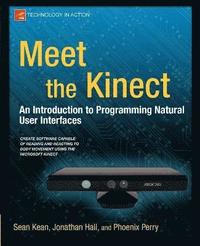 Meet the Kinect: An Introduction to Programming Natural User Interfaces

av Sean Keane, Jonathan Hall, Phoenix Perry
Häftad Engelska, 2012-01-05
279
Köp
Spara som favorit
Skickas inom 7-10 vardagar.
Gratis frakt inom Sverige över 159 kr för privatpersoner.
Meet the Kinect introducesthe exciting world of volumetric computing using the Microsoft Kinect. You'll learn to write scripts and software enabling the use of the Kinect as an input device. Interact directly with your computer through physical motion. The Kinect will read and track body movements, and is the bridge between the physical reality in which you exist and the virtual world created by your software.

Microsofts Kinect was released in fall 2010 to become the fastest-selling electronic device ever. For the first time, we have an inexpensive, three-dimensional sensor enabling direct interaction between human and computer, between the physical world and the virtual. The Kinect has been enthusiastically adopted by a growing culture of enthusiasts, who put it to work in creating technology-based art projects, three-dimensional scanners, adaptive devices for sight-impaired individuals, new ways of interacting with PCs, and even profitable business opportunities.

Meet the Kinect is the resource to get you started in mastering the Kinect and the exciting possibilities it brings. Youll learn about the Kinect hardware and what it can do. Youll install drivers and learn to download and run the growing amount of Kinect software freely available on the Internet. From there, youll move into writing code using some of the more popular frameworks and APIs, including the official Microsoft API and the language known asProcessing that is popular in the art and creative world.

Meet the Kinect is aimed at technology enthusiasts, including programmers, artists, and entrepreneurs who are fascinated by the possibilities arising from the direct, human-computer interaction enabled by the Microsoft Kinect. The book is for anyone who wants to take advantage of the growing body of software for the Kinect, and for those who wish to write their own programs and scripts involving th...
Visa hela texten

Sean Kean is an artist and entrepreneur living in Brooklyn, New York. With a background spanning engineering, art, education, and travel, he is passionate about simplifying complex technology in order to make tools more accessible to others. Insatiable in his curiosity, the author has filled his passport as a flight attendant, rediscovered learning through play as an early childhood educator, studied the streets and buildings of New York City in order to earn both a taxi driver license and real estate sales license, and has been programming well enough to be dangerous for more than 20 years. Sean is currently working to bridge the gap between the physical and digital worlds at HERE, Inc. (http://here.st), to bring volumetric 3D TVs mainstream with the VoxieBox (www.voxiebox.com), and to help professionals working with volumetric depth cameras, software, and displays to connect to each other through the Volumetric Society (www.volumetric.org) via a publication, conference, and local chapter meetups you can help set up in your city.