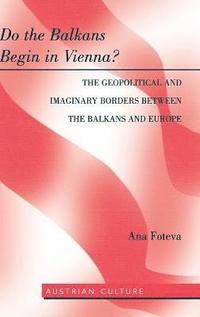 Do the Balkans Begin in Vienna? The Geopolitical and Imaginary Borders between the Balkans and Europe

av Ana Foteva
Inbunden Engelska, 2014-05-22
999
Köp
Spara som favorit
Skickas inom 3-6 vardagar.
Fri frakt inom Sverige för privatpersoner.
Finns även som
Visa alla 2 format & utgåvor
Do the Balkans Begin in Vienna? takes up one of the most fraught areas of Europe, the Balkans. Variously part of the Austro-Hungarian, Ottoman, and Byzantine empires, this region has always been considered Europe's border between the Orient and the Occident. Aiming to clarify the politics of drawing cultural borders in this region, the book examines the relations between the Habsburg Monarchy and the Balkans as an intermediate space between West and East. It demonstrates that the dichotomy Orient versus Occident is insufficient to explain the complexity of the region. Therefore, cultural multi-belonging, historical disruption, and recurrence of identities and conflicts are proposed to be "the essence" of the Balkans. Do the Balkans Begin in Vienna? depicts the fictional imagination of the Balkans as a "utopian dystopia". This oxymoron encompasses the utopian projections of the Austrian/ Habsburg writers onto the Balkans as a place of intact nature and archaic communities; the dystopian presentations of the Balkans by local authors as an abnormal no-place (ou-topia) onto which the historical tensions of empires have been projected; and, finally, the depictions of the Balkans in the Western media as an eternal or recurring dystopia. There is at present no other study that distinguishes these particular geographical reference points. Thus, this book contributes to the research on Europe's historical memory and to scholarship on postcolonial and/or post-imperial identities in European states. The volume is recommended for courses on Austrian, German, Balkan, and European studies, as well as comparative literature, theater, media, Slavic literatures, history, and political science.
Visa hela texten

"Ana Foteva's `Do the Balkans Begin in Vienna?' is an exemplary representation of the work necessary to understand in contemporary terms a region where nationalist-imperialist paradigms for cultural study simply do not hold. The text takes up several cultures and breathes life into their intersections, as they meet in the present, reawakening the joint legacies of three ancient empires (Habsburg, Ottoman, and Byzantine) out from behind the blackout curtain of the Soviet Union. She presents authors writing in German, Serbian, and Bosnian, each trying to understand what stories comprise the region's inheritance beyond nationalism. Foteva's deft juxtaposition of history, travelogue, and literature opens new visions of how cultures interact when they both share and are divided multiple. This volume is a must for anyone working in Austrian and Slavic literatures." (Katherine Arens, University of Texas at Austin) "Given the competing and overlapping legacies and identities that complicate the Balkans' cultural landscape, it is very helpful to finally read a book that links the literature and history of the Habsburg and Ottoman realms. No less refreshing is a book that credits Yugoslavia with nurturing and preserving the region's multicultural legacy at least until its own dissolution." (Charles Ingrao, Purdue University)

Bloggat om Do the Balkans Begin in Vienna? The Geopo...

Ana Foteva received her PhD in German literature at Purdue University. Currently she holds the position of Visiting Assistant Professor in German Studies at St. Lawrence University. She is the recipient of several grants and awards. Foteva has published in both European and American journals on a variety of topics, including Austrian literature of the fin de siecle, literatures of Southeastern Europe, German Classicism and theater, and contrastive analysis.

Contents: Introduction: The Balkans' Postmodern Geography - Travelogues of War and Peace - Serbia: Between East and West - Bosnia-Herzegovina: Where Orient and Occident Meet - Slovenia and Croatia: Between the Balkans and Europe - The Balkans between Utopia and Dystopia - Myth and Memory in the Habsburg Monarchy and the Balkans.