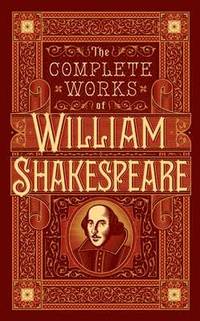 av William Shakespeare
(1 röst)
Inbunden Engelska, 2015-10-01
319
Köp
Spara som favorit
Skickas inom 7-10 vardagar.
Fri frakt inom Sverige för privatpersoner.
Beställ boken senast fredag 11 december kl. 12:45 för leverans innan julafton
Hamlet. Romeo and Juliet. Henry V. Macbeth. A Midsummer Night's Dream. King Lear. Lovers of literature will immediately recognise these as signature works of William Shakespeare, whose plays still rank as the greatest dramas ever produced in the English language four centuries after they were written. The Complete Works of William Shakespeare collects all thirty-seven of the immortal Bard's comedies, tragedies, and historical plays in a beautiful edition. This volume also features Shakespeare's complete poetry, including the sonnets. With this beautiful edition, you can enjoy Shakespeare's enduring literary legacy again and again. The Complete Works of William Shakespeare is one of Barnes & Noble's Leatherbound Editions. Each volume presents classic works by the world's best-loved authors in a beautifully designed edition bound in bonded leather. The attractive covers are embossed with colourful foils and the books have many special details including decorative endpapers, gilded edges, and ribbon markers. Elegant and affordable, these volumes are cornerstones for any home library.
Visa hela texten

William Shakespeare was an English poet and playwright, widely regarded as the greatest writer in the English language and the world's pre-eminent dramatist. He is often called England's national poet and the "Bard of Avon." His extant works include some collaboration, consisting of about 38 plays, 154 sonnets, two long narrative poems, and a few other verses, the authorship of some of which is uncertain. His plays have been translated into every major living language and are performed more often than those of any other playwright. John Lotherington has written widely on Renaissance literature and history, including co-authored surveys of sixteenth-century Europe, Years of Renewal, and sixteenth-century England, The Tudor Years. He is at present a Program Director at the Salzburg Global Seminar.