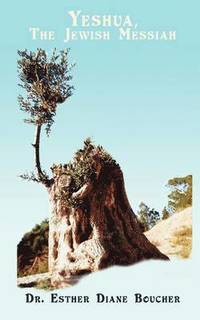 av Dr Esther Diane Boucher
Häftad Engelska, 2008-11-25
139
Köp
Spara som favorit
Skickas inom 10-15 vardagar.
Fri frakt inom Sverige över 159 kr för privatpersoner.
Finns även som
Visa alla 1 format & utgåvor
Christianity has attempted to present Messiah in universal terms by stripping Him of His Jewish identity and presenting Him to the world as a universal, one-size-fits-all Savior. In doing so, they have removed Him from the inheritance of Abraham and robbed Him of His core identity. Jewish people have experienced thousands of years of persecution. They have been taught to believe that they are traitors to their people if they accept Yeshua as Messiah. They have looked for a King, a political leader who would free them from their oppressors and provide peace and prosperity. So they also have robbed Him of His core identity.

Bible critics and scholars are talking about the differences between the Messiah of Christianity and the historical person Yeshua, referred to as Jesus Christ. But who is Yeshua? Yeshua was a Torah-observant Jew who practiced the faith of Biblical Judaism throughout His lifetime. He looked like a Jew, acted like a Jew, and worshipped like a Jew. Failure to understand these facts has robbed Jew and Christians alike of spiritual understanding of who Yeshua really was. As you read this book, you'll be amazed at just how Jewish Yeshua really was! This is not just another book about a messiah, but a thought provoking, fun to read journey into the world and culture of the Bible that will change how you think and affirm the historical basis for faith in Yeshua, the Jewish Messiah.
Visa hela texten