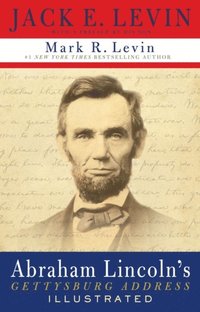 av Jack E Levin, Mark R Levin
E-bok (EPUB - DRM), Engelska, 2012-11-27
Den här boken kan endast laddas ned av privatpersoner.
158
Den här boken kan endast laddas ned av privatpersoner.
Ladda ned
Spara som favorit
Laddas ned direkt
Läs i vår app för iPhone och iPad
Finns även som
Visa alla 1 format & utgåvor
Fourscore and seven years ago our fathers brought forth on this continent a new nation, conceived in liberty and dedicated to the proposition that all men are created equal. Long before his conservative manifesto Liberty and Tyranny became a #1 New York Times bestseller, Mark R. Levins love for his country was instilled in him by his father, Jack E. Levin. At family dinners, Jack would share his bountiful knowledge of American history and, especially, the inspiration of Abraham Lincoln. The son of immigrants, Jack Levin is an American patriot who responded with deep personal emotion to Lincolns call for liberty and equality. His admiration for the great Civil War president inspired him to personally design and produce a beautiful volume, enhanced with period illustrations and striking battlefield images by Matthew Brady and other renowned photographers of the era, that brings to life the words of Lincolns awe-inspiring response to one of the Civil Wars costliest conflicts. Now Jack Levins loving homage to the spirit of American freedom is available in an essential edition that features his original foreword as well as a touching new preface by his son, Mark Levin. In this way, Abraham Lincolns Gettysburg Address Illustrated celebrates the passing of patriotic pride and historical insight from generation to generation, from father to son. *** The day following the dedication of the National Soldiers Cemetery at Gettysburg, Edward Everett, who spoke before Lincoln, sent him a note saying: Permit me to express my great admiration for the thoughts expressed by you, with such eloquent simplicity and appropriateness, at the consecration of the cemetery. I should be glad, if I could flatter myself that I came as near to the central idea of the occasion, in two hours, as you did in two minutes. Lincoln wrote back to Everett: In our respective parts yesterday, you could not have been excused to make a short address, nor I a long one. I am pleased to know that in your judgement the little I did say was not entirely a failure.
Visa hela texten