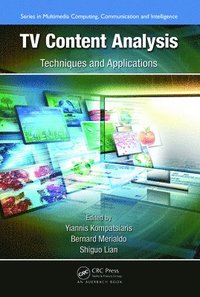 av Yiannis Kompatsiaris, Bernard Merialdo, Shiguo Lian
Inbunden Engelska, 2012-03-16
1789
Köp
Spara som favorit
Finns även som
Visa alla 2 format & utgåvor
The rapid advancement of digital multimedia technologies has not only revolutionized the production and distribution of audiovisual content, but also created the need to efficiently analyze TV programs to enable applications for content managers and consumers. Leaving no stone unturned, TV Content Analysis: Techniques and Applications provides a detailed exploration of TV program analysis techniques. Leading researchers and academics from around the world supply scientifically sound treatment of recent developments across the related subject areas-including systems, architectures, algorithms, applications, research results, emerging approaches, and open issues. The book is organized into six parts: Content Extraction - deals with automatic analysis and annotation of TV content, addressing generic semantics and concepts as well as TV content Content Structuring - examines techniques for identifying interesting parts of TV programs and supplying direct access to it Content Recommendation - explores the problem of providing users with the most relevant content, addressing the problem of an ever-increasing amount of available content Content Quality - considers visual perception and quality approaches in the multi-display TV context and the specific mobile TV scenario Web and Social TV - presents studies on Web and TV convergence and on how user-generated content in Web 2.0 applications can be used to enhance services Content Production - covers postproduction, visual effects, and presentation standards Most parts start with a chapter that provides an overview of that area, followed by state-of-the-art approaches focusing on specific issues covered in that section. Reporting on recent advances in the field, the book provides you with the global view and up-to-date understanding of emerging trends needed to participate in the development of the digital TV domain.
Visa hela texten

Dr. Ioannis (Yiannis) Kompatsiaris is a senior researcher (Researcher B') with the Informatics and Telematics Institute in Greece. His research interests include semantic multimedia analysis, indexing and retrieval, Web 2.0 content analysis, knowledge structures, reasoning, and personalization for multimedia applications. He received his PhD in 3-D-model-based image sequence coding from the Aristotle University of Thessaloniki in 2001. He is the coauthor of 55 papers in refereed journals, 30 book chapters, 7 patents, and more than 170 papers in international conferences. He is also the coeditor of the book Semantic Multimedia and Ontologies: Theory and Applications, the guest editor of six special issues, and has served as a program committee member and regular reviewer for a number of international journals and conferences. Kompatsiaris has been the co-organizer of various conferences and workshops, such as the ACM International Conference on Image and Video Retrieval (CIVR), International Workshop on Image Analysis for Multimedia Interactive Services (WIAMIS), and Summer School on Multimedia Semantics (SSMS). He is also the coordinator of the SocialSensor-Sensing User Generated Input for Improved Media Discovery and Experience, European Integrated Project. He has been appointed as chair of the Technical Committee 14 of the International Association for Pattern Recognition (IAPR-TC14, "Signal Analysis for Machine Intelligence"). Kompatsiaris is a senior member of the IEEE and a member of the ACM. Bernard Merialdo is a professor in the Multimedia Department of EURECOM, France, and head of the department. A former student of the Ecole Normale Superieure, Paris, he received his PhD from Paris University and a "Habilitation a Diriger des Recherches" from Paris 7 University. For more than 10 years, he was a research staff, then project manager at the IBM France Scientific Center, working on probabilistic techniques for Large Vocabulary Speech Recognition. He later joined EURECOM to set up the Multimedia Department. His research interests include the analysis, processing, indexing, and filtering of multimedia information to solve user-related tasks. His research covers a whole range of problems, from content extraction based on recognition techniques, content understanding based on parsing, multimedia content description languages (MPEG7), similarity computation for applications such as information retrieval, and user personalization and user interaction for the construction of applications.Merialdo has participated in numerous conference program committees. He is part of the organizing committee for the CBMI workshop. He was editor for the IEEE Transactions on Multimediaand chairman of the ACM Multimedia conference in 2002. He often acts as an expert and reviewer for French and European research programs. Merialdo is a senior member of the IEEE and a member of the ACM. Shiguo Lian received his PhD from Nanjing University of Science and Technology, Nanjing, China. He was a research assistant in City University of Hong Kong in 2004. Since July 2005, he has been a research scientist with France Telecom R&D (Orange Labs), Beijing. He is the author or coauthor of more than 80 refereed international journal and conference papers covering topics such as secure multimedia communication, intelligent multimedia services, and ubiquitous communication. He has contributed 15 book chapters and held 16 filed patents. He has authored the book Multimedia Content Encryption: Techniques and Applications (CRC Press, Boca Raton, FL, 2008) and has edited seven books. He was nominated for the prize of "Innovation Prize in France Telecom" and "Top 100 Doctorate Dissertation in Jiangsu Province" in 2006. Lian is a member of the IEEE Communications and Information Security Technical Committee, the IEEE Multimedia Communications Technical Committee, the IEEE SMCS Technical Committee on Soft Computing, an