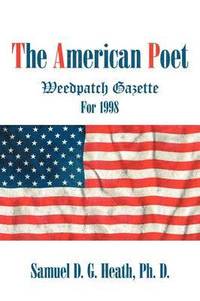 av Samuel D G Heath, Samuel D G Heath Ph D
Häftad Engelska, 2009-06-10
259
Köp
Spara som favorit
Skickas inom 10-15 vardagar.
Fri frakt inom Sverige för privatpersoner.
Awarded an American Legion Scholarship I am also an award winning author and have published numerous articles and books. Having attended several colleges and universities eventually earning my Ph. D. in Human Behavior I hold several life credentials in education earned during many years as an educator together with years spent working in the Aerospace Industry and other occupations. But to call Einstein's famous equation E=MC2 incomplete because it does not account for life and death does seem quite extraordinary, yet these remain the two greatest mysteries they have ever been denying us thus far a "theory of everything."

Something animates life and departs with death, but what this "something" is not all our science has yet discovered, though things like the Large Hadron Collider may provide needed insight, and it has been in the pursuit of knowledge about these two greatest mysteries that has compelled me into so many varied academic studies and careers attempting to make sense of the world and our place in it and how people think and deal with the issues of life and death philosophically, religiously, and politically. The things I have discovered along the way compelled me to much research and speculation about these mysteries and how they impact our lives, to communicate my thoughts about them to share with others in a daily journal and posted to my website and provided in book format each year. These writings are of importance in an increasingly dangerous world with a most uncertain future due to so much corruption, ineptitude and lack of accountability in our own government as well as that of others, the abject failure of our schools due to the very same things especially the same lack of accountability we find in government, the religious and political hatreds with protracted wars worldwide and little to give hope for world peace I believed my articles about these important enough to publish in book format.