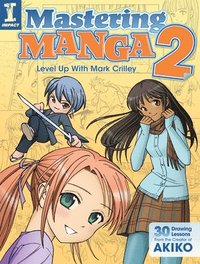 Level Up with Mark Crilley

av Mark Crilley
(5 röster)  |  Läs 1 recension
Häftad Engelska, 2013-10-23
239
Köp
Spara som favorit
Level UP and master more manga with YouTube's most popular art instructor, Mark Crilley! It's here! The highly anticipated follow-up to the best-selling Mastering Manga provides everything you need, regardless of your skill-level, to learn how to draw manga like a pro. Graphic novelist and YouTube's most popular art instructor Mark Crilley is back to lead you on your artistic journey. No matter what your experience, Mastering Manga 2 will have you creating manga in no time. You'll master the basics of facial and body proportions as your drawing skills increase to the next level. Clear and easy step-by-step instruction will walk you through the mechanics of how to draw manga. You'll learn to create characters in diverse settings and scenes, as well as a variety of styles. Lessons on background and perspective will help you pull it all together into a full manga story panel. More than 30 step-by-step demonstrations! Proportion. Learn to draw all types of bodies, faces, ages and ethnicities in profile, from behind, and more, including how to turn a full-sized character into an adorable chibi. Clothing and body language. Reveal your character's personality through hairstyles, expressions, clothing styles and accessories. Useful poses. Tweak 16 classic manga poses to make them your own, or follow along with specific step-by-step demonstrations on drawing characters sitting, fighting, kissing and more. Environments. Create all types of habitats and moods using forest elements, rain, and the effects of water and weather. Anatomy of a manga panel. Learn how to choose the correct composition, background, depth and balance to create the most effective panel layout for your story. Grab a pencil and learn all the secrets needed to bring your manga story to life!
Visa hela texten

"He creates a compilation of strong lessons and ideas to give budding artists the tools they need to harnessing the manga perspective. Grounded in various art basics, pointing out sizing, angles and proportioning, Mark creates a lesson-plan system that is effective in charting these basics." - Nerd Reactor, 2013

Mark Crilley is the author and illustrator of several graphic novel and prose fiction book series, including thirteen-time Eisner nominee Akiko, Billy Clikk, Miki Falls, Brody's Ghost, and Mastering Manga (IMPACT Books, 2012). Since being selected for Entertainment Weekly's "It List" in 1998, Crilley has spoken at hundreds of venues throughout the world and become one of YouTube's top 25 Most Subscribed Gurus, creating drawing demonstration videos that have been viewed more than 60 million times. His work has been featured in USA Today, the New York Daily News and Disney Adventures magazine, as well as on Comcast On Demand and CNN Headline News.