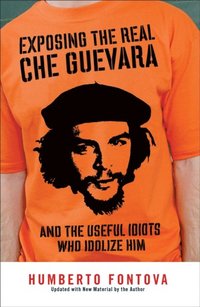 And the Useful Idiots Who Idolize Him

av Humberto Fontova
E-bok (EPUB - DRM), Engelska, 2007-04-19
169
Ladda ned
Spara som favorit
Laddas ned direkt
Läs i vår app för iPhone, iPad och Android
A debunking of liberal myths about one of the most bloodthirsty icons of the twentieth century.Hollywood, Madison Avenue, and the mainstream media celebrate Ernesto &quoteChe&quote Guevara as a saint, a sex symbol, and a selfless martyr. But their ideas about Che?whose face adorns countless T-shirts and posters?are based on the lies of Fidel Castro's murderous dictatorship.Che's hipster fans are classic &quoteuseful idiots,&quote the name Stalin gave to foolish Westerners who parroted his lies about communism. And their numbers only increased after a new biopic was released, starring Benicio Del Toro.But as Humberto Fontova reveals in this myth-shattering book, Che was actually a bloodthirsty executioner, a military bumbler, a coward, and a hypocrite. In fact, Che can be called the godfather of modern terrorism.Fontova reveals:? How he longed to destroy New York City with nuclear missiles.? How he persecuted gays, blacks, and religious people.? How he loved material wealth and private luxuries, despite his image as an ascetic.Are Che fans like Angelina Jolie, Jesse Jackson, Carlos Santana, and Johnny Depp too ignorant to realize they've been duped? Or too anti-American to care?
Visa hela texten