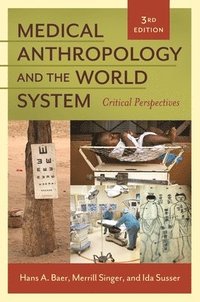 Medical Anthropology and the World System

av Hans A Baer, Merrill Singer, Ida Susser
Häftad Engelska, 2013-05-23
409
Köp
Spara som favorit
Skickas inom 10-15 vardagar.
Fri frakt inom Sverige för privatpersoner.
Finns även som
Visa alla 1 format & utgåvor
Now in its third edition, this textbook serves to frame understandings of health, health-related behavior, and health care in light of social and health inequality as well as structural violence. It also examines how the exercise of power in the health arena and in society overall impacts human health and well-being. Medical Anthropology and the World System: Critical Perspectives, Third Edition includes updated and expanded information on medical anthropology, resulting in an even more comprehensive resource for undergraduate students, graduate students, and researchers worldwide. As in the previous versions of this text, the authors provide insights from the perspective of critical medical anthropology, a well-established theoretical viewpoint from which faculty, researchers, and students study medical anthropology. It addresses the nature and scope of medical anthropology; the biosocial and political ecological origins of disease, health inequities, and social suffering; and the nature of medical systems in indigenous and pre-capitalist state societies and modern societies. The third edition also includes new material on the relationship between climate change and health. Finally, this textbook explores health praxis and the struggle for a healthy world.
Visa hela texten

Hans A. Baer, PhD, has been faculty at the University of Melbourne in the Development Studies Program since 2006. Previously he taught for many years in various universities in the United States. Merrill Singer, PhD, is professor in the departments of Anthropology and Community Medicine, and senior research scientist at Center for Health, Intervention and Prevention at the University of Connecticut. Additionally, he is faculty at the Center for Interdisciplinary Research on AIDS at Yale University. Ida Susser is professor of anthropology at Hunter College, CUNY, and adjunct professor of sociomedical sciences at Columbia University's Mailman School of Public Health. She is founding president of the Society for the Anthropology of North America, and she served as president of the American Ethnological Society.