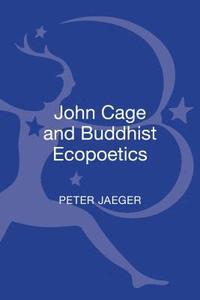 John Cage and the Performance of Nature

av Dr Peter Jaeger
Inbunden Engelska, 2013-09-26
999
Köp
Spara som favorit
Skickas inom 10-15 vardagar.
Gratis frakt inom Sverige över 159 kr för privatpersoner.
Finns även som
Visa alla 1 format & utgåvor
John Cage was among the first wave of post-war American artists and intellectuals to be influenced by Zen Buddhism and it was an influence that led him to become profoundly engaged with our current ecological crisis. In John Cage and Buddhist Ecopoetics, Peter Jaeger asks: what did Buddhism mean to Cage? And how did his understanding of Buddhist philosophy impact on his representation of nature? Following Cage's own creative innovations in the poem-essay form and his use of the ancient Chinese text, the I Ching to shape his music and writing, this book outlines a new critical language that reconfigures writing and silence. Interrogating Cage's 'green-Zen' in the light of contemporary psychoanalysis and cultural critique as well as his own later turn towards anarchist politics, John Cage and Buddhist Ecopoetics provides readers with a critically performative site for the Zen-inspired "nothing" which resides at the heart of Cage's poetics, and which so clearly intersects with his ecological writing.
Visa hela texten

A provocative and useful contribution to Cage studies ... Jaeger's study is an important one, in particular for its ease in discussing difficult concepts of Buddhism and its sure handling of continental philosophy; the bridges he builds between both traditions point toward a particularly fruitful direction for future scholarship. -- Rob Haskins, University of New Hampshire * Interdisciplinary Studies in Literature and the Environment, vol 21, no 4 * What makes Peter Jaeger's book on Cage's Zen interests unique is its turn from Buddhist ideas to the formal innovations that Cage took to be integral to an adequate ecopoetics. Jaeger takes seriously Cage's belief that one must study nature in her manner of operation; consequently, his book does not talk about Cagean Zen; rather, it performs it, providing us with a theatrical mise-en-scene of its processes. Adopting Cage's own procedural methods, based on I Ching chance operations, Jaeger presents his "topics" in a highly novel way, allowing for interruptions, silences, and incremental repetitions. In the course of Jaeger's own "Lectures on Nothing," we learn a great deal about Cage's relationship to other poets and artists as well as about his particular critique, not unrelated to Lacan's psychoanalytic one, of Western social and political organization. Himself a poet, Jaeger has produced a learned study that is also great fun to read-a delightful poetic text in its own right. * Marjorie Perloff, Stanford, USA * Peter Jaeger offers an enlightening guide to Zen and related Western sources and resonances in John Cage's aesthetics. John Cage and Buddhist Ecopoetics is a lo-fi commentary on how some tenets of Buddhist thought, especially as filtered through D. T. Suzuki and Alan Watts, were pragmatically adapted and amalgamated in radical mid-20th-centry North American poetry and art. * Charles Bernstein, University of Pennsylvania, USA *

Peter Jaeger is Reader in the Department of English and Creative Writing at Roehampton University, UK.