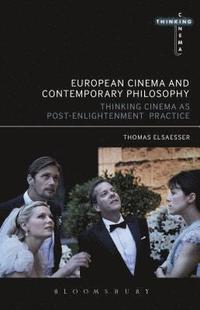 av Thomas Elsaesser
Häftad Engelska, 2018-11-29
369
Köp
Spara som favorit
Finns även som
Visa alla 3 format & utgåvor
This groundbreaking volume for the Thinking Cinema series focuses on the extent to which contemporary cinema contributes to political and philosophical thinking about the future of Europe's core Enlightenment values. In light of the challenges of globalization, multi-cultural communities and post-nation state democracy, the book interrogates the borders of ethics and politics and roots itself in debates about post-secular, post-Enlightenment philosophy. By defining a cinema that knows that it is no longer a competitor to Hollywood (i.e. the classic self-other construction), Elsaesser also thinks past the kind of self-exoticism or auto-ethnography that is the perpetual temptation of such a co-produced, multi-platform 'national cinema as world cinema'. Discussing key filmmakers and philosophers, like: Claire Denis and Jean-Luc Nancy; Aki Kaurismaki, abjection and Julia Kristeva; Michael Haneke, the paradoxes of Christianity and Slavoj Zizek; Fatih Akin, Alain Badiou and Jacques Ranciere, Elsaesser is able to approach European cinema and assesses its key questions within a global context. His combination of political and philosophical thinking will surely ground the debate in film philosophy for years to come.
Visa hela texten

Accessible and rigorous, brimming with indispensable insights for students, scholars, and readers of film studies, continental philosophy, visual culture, and media theory ... It is a rare pleasure to read a work of film-philosophy that so carefully balances textual hermeneutics and political deconstructions. * Alphaville: Journal of Film and Screen Media * Constitutes an interdisciplinary epistemological and philosophical map, a challenging and precious tool to register, draw and address the complex socio-political dynamics of our time with a critical and experimental spirit ... [An] essential text (a must read for these dangerous times). * New Review of Film and Television Studies * Not only a rich exploration of the relationship between film and philosophy, European Cinema and Continental Philosophy makes a timely claim on the stakes of thinking Europe today. Elsaesser provides a new and urgently needed framework for grappling with the contemporary conditions of European politics and film culture. * Rosalind Galt, Professor of Film Studies, King's College London, UK * Elsaesser argues for a contemporary European cinema of openness and multiplicity, for a cinema that foregrounds autonomy and liberation. These arguments are backed up by an impressive account of contemporary European philosophy and its influences on cinematic thought. Elsaesser develops the key notions of a 'cinema of abjection' and 'post-heroic narratives' and, as a result, he charts an impressive map of European cinema and a European politics to come. * Richard Rushton, Senior Lecturer in Film Studies, Lancaster University, UK * European Cinema and Continental Philosophy offers an important and deeply engaging reappraisal of the status of European cinema at a moment of apparent crisis. There is both defiance and brilliance in the way that Elsaesser, situating cinema in its wider philosophical, political, social, and cultural contexts, seizes upon its perceived marginality and irrelevance as the key to its strength, and presents the widespread "abjection" he identifies, as evidence of creative freedom and the embodiment of Europe's core Enlightenment values. This volume combines daring originality with the impressive scholarship we have come to expect from Thomas Elsaesser. It is a work of major significance which will have a profound impact upon contemporary and future film studies. * Wendy Everett, Professor Emeritus, University of Bath, UK *

Thomas Elsaesser is Emeritus Professor at the University of Amsterdam, The Netherlands, and since 2013 Visiting Professor at Columbia University. European Cinema and Continental Philosophy further develops Elsaesser's approach to national and auteur cinema begun with Fassbinder's Germany: History Identity Subject (1996), continued with European Cinema - Face to Face with Hollywood (2005) and given a theoretical turn in Film Theory: An Introduction through the Senses (2010).