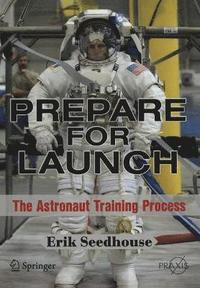 av Erik Seedhouse
Häftad Engelska, 2010-04-13
449
Köp
Spara som favorit
Skickas inom 10-15 vardagar.
Fri frakt inom Sverige för privatpersoner.
Finns även som
Visa alla 1 format & utgåvor
Today's astronauts require many different abilities. They must not only be expert in performing flight simulations but must also be proficient in such dissimilar subjects as photography, thermodynamics, electrical repairs, flight procedures, oceanography, public affairs, and geology. In Prepare for Launch, the author introduces the technologies and myriad activities that constitute or affect astronaut training, such as the part-task trainers, emergency procedures, the fixed-based and motion-based simulators, virtual environment training, and the demands of training in the Weightless Environment Training Facility. With plans to return to the Moon and future missions to Mars, the current selection criteria and training are very different from those used for short duration mission Space Shuttle crews. Dr. Erik Seedhouse in this book focuses on how astronaut candidates are taught to cope with different needs and environments (for example, hibernation, artificial gravity, and bioethics issues) and also includes brief discussions of the astronaut application and selection process.
Visa hela texten

From the reviews: "In Prepare for Launch you can read a detailed and thorough account written by someone who tried very hard to change his astronaut dream into a reality. Seedhouse's book contains the nuts and bolts of astronaut training in North America and Europe. ... He leads us step by step through the protracted process of becoming an astronaut. ... Seedhouse has written an intriguing account of the training process, and his book is a joy to read." (Carole Stott, The Observatory, Vol. 131 (1221), April, 2011)

The appeal of becoming an astronaut is growing ever larger. The combined 2008-2009 Astronaut Selection Campaigns of NASA, the European Space Agency (ESA) and the Canadian Space Agency (CSA) for a total of just 21 positions attracted 17,300 applications from outstanding scientists, engineers and/or medical doctors with a wide variety of backgrounds. Among the qualities required are creativity, diversity, teamwork and a probing mind, together with a high level of fitness to withstand the physical demands of training and space flight. Prepare for Launch surveys and investigates the path from astronaut application to selection, and from probationary training to mission preparation. It chronicles the intense, highly technical and sophisticated training necessary to forge a flight crew capable of responding to any conceivable emergency and capable of expertly executing hundreds of mission tasks. Dr Erik Seedhouse is eminently qualified to provide a unique insight into this subject as he was recently (February 2009) one of the final 20 candidates (from an initial group of 5352) considered for astronaut selection by the Canadian Space Agency. An aerospace research scientist specializing in space life sciences and physiology, Dr Seedhouse was an Astronaut Training Consultant and wrote the Spaceflight Participants Flight Surgeon's Manual for Bigelow Aerospace in 2005. He also developed astronaut training protocols for future spaceflight participants and wrote and edited several chapters of Bigelow Aerospace's Astronaut Training Manual. Erik Seedhouse is the author of Tourists in Space: A Practical Guide, Lunar Outpost and the forthcoming Martian Outpost for Springer Praxis.

Section 1: Becoming an Astronaut. The Application Process. The Selection Process.- Section 2: Training for Life in Space. Astronaut Training. Technical Assignments. Types of Missions. Mission Traning.- Section 3: Before Launch. Behind the Scenes. Countdown to the First Flight. The Final Count.