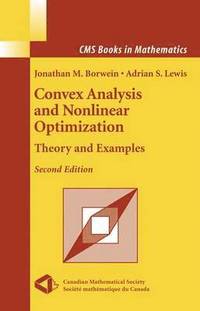 From the reviews: MATHEMATICAL REVIEWS "The present book gives a concise treatment of the area, aiming to show the relevance in particular of new developments in nonsmooth analysis to optimization theory...The book is of a manageable size and as such should appeal to the student. Further, the proofs are generally short and snappy, revealing the power of the abstract structural approach and fruitful interplay of geometrical and topological ideas. However, considerable ground is covered and, as a graduate text should, it develops the subject up to the frontiers of current research, giving an idea of areas for further exploration...This text will give impetus to the teaching of analysis because it makes evident its significant applications in optimization. But it will also bring added attraction to the study of optimization because it reveals so much of its abstract structural base." "The book is divided into 11 chapters and provides a comprehensive presentation of the main features of convex analysis and nonlinear optimisation. Each result is sustained by a set of theorems, propositions and corollaries and includes rigorous proofs and clarifying discussions. They are complemented by a series of theoretical exercises. ... This book is warmly recommended for an advanced course in analysis for mathematicians or as a first graduate course for students involved with optimization theory." (Carlos Narciso Bouza Herrera, Zentralblatt MATH, Vol. 1116 (18), 2007)