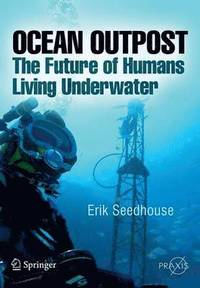 The Future of Humans Living Underwater

av Erik Seedhouse
Häftad Engelska, 2010-09-30
399
Köp
Spara som favorit
Skickas inom 10-15 vardagar.
Fri frakt inom Sverige för privatpersoner.
Finns även som
Visa alla 1 format & utgåvor
One of the greatest scientific and technological achievements of the 21st century will be to cast a light on the eternal darkness of the deep ocean and this book identifies the key determinants of life or death in its extreme environment. Dr. Erik Seedhouse examines how individuals survive free dives to 200m, how humans adapt to breathing exotic gas mixes at depths exceeding 700m, and how technological innovation will enable humans to enter unendurable realms. The book describes the problems unique to the hostile environment of the deep ocean, such as decompression sickness, discusses how the human body responds to increased pressure, and what happens when adaptive mechanisms fail. Ocean Outpost describes how the technology will evolve, how crews will be selected and trained and what a typical underwater mission will entail. The book also chronicles the frontiers of diving medicine that will eventually take humans into the midst of a world we could once only guess at.
Visa hela texten

Dr. Erik Seedhouse is an aerospace and hyper/hypobaric research scientist specializing in space life sciences and diving physiology. He obtained his Ph.D. in Physiology while working for the European Space Agency between 1996 and 1998. In 2001, he established the Freediving Research Project while working as a co-director of the Extreme Physiology Program at Simon Fraser University. In 2005, he worked as as Astronaut Training Consultant for Bigelow Aerospace, for whom he wrote the Spaceflight Participant's Flight Surgeon's Manual. He also developed astronaut-training protocols for future spaceflight participants and wrote and edited several chapters of Bigelow Aerospace's Astronaut Training Manual. Considered a world authority on the subject of space tourism, the author recently wrote the Encyclopedia Britannica defintion of the subject. In 2009 he was selected as an astronaut candidate in the final group of thirty being considered for selection by the Canadian Space Agency. He has professional scuba-diving certification and has made more than 300 dives over 25 years.