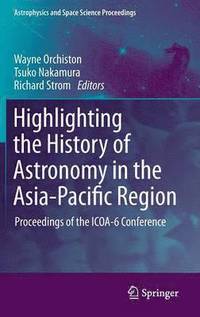 Highlighting the History of Astronomy in the Asia-Pacific Region

Proceedings of the ICOA-6 Conference

Wayne Orchiston is an Associate Professor in the Center for Astronomy at James Cook University (Australia), where he supervises a large pool of off-campus Ph.D. students and carries out research on the history of Australian, English, French, Indian, New Zealand, and USA astronomy. He also edits the 'Journal of Astronomical History and Heritage.' Until his recent retirement, Tsuko Nakamura carried out research on solar system astronomy and the history of Japanese astronomy whilst working at the National Astronomical Observatory of Japan in Tokyo. He is currently Professor of Astronomy at Teikyo-Heisei University in Tokyo, Japan. Richard Strom recently retired as Chief Scientist at ASTRON, where he carried out radio astronomical research, while also investigating the history of Dutch radio astronomy and aspects of Chinese astronomical history. He is now an Adjunct Professor in the Center for Astronomy at James Cook University (Australia). In 2010 he will spend half a year as a Visiting Professor at the Chinese Academy of Sciences.