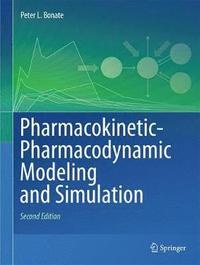 av Peter L Bonate
Inbunden Engelska, 2011-07-01
2299
Köp
Spara som favorit
Skickas inom 3-6 vardagar.
Fri frakt inom Sverige för privatpersoner.
Finns även som
Visa alla 4 format & utgåvor
This is a second edition to the original published by Springer in 2006. The comprehensive volume takes a textbook approach systematically developing the field by starting from linear models and then moving up to generalized linear and non-linear mixed effects models. Since the first edition was published the field has grown considerably in terms of maturity and technicality. The second edition of the book therefore considerably expands with the addition of three new chapters relating to Bayesian models, Generalized linear and nonlinear mixed effects models, and Principles of simulation. In addition, many of the other chapters have been expanded and updated.
Visa hela texten

Peter Bonate has 16 years industrial experience, 13 years as a clinical pharmacologist/pharmacokineticist and three years in drug metabolism and bioanalysis. He is currently a Director in the Clinical Pharmacology, Modeling, and Simulation department at GlaxoSmithKline in the oncology and rare diseases therapeutic areas. He has worked at Genzyme, Hoechst Marion Roussel, Eli Lilly, and Quintiles. He received his PhD in 1996 from Indiana University in Medical Neurobiology with an emphasis on the pharmacokinetics of drugs of abuse. He received an MS in statistics from the University of Idaho and an MS in Pharmacology from Washington State University, both in 1990. In 2003 he was elected a Fellow of the American College of Clinical Pharmacology and in 2007 was elected a fellow of the American Association of Pharmaceutical Scientists (AAPS). He was founder of the Modeling and Simulation focus group, has served as chair of the population pharmacokinetics focus group, and was the Clinical Pharmacology and Translational Research Section Chair within AAPS. He has served or currently serves on the editorial boards for the Journal of Clinical Pharmacology, Pharmaceutical Research, Journal of Pharmacokinetics and Pharmacodynamics, and The AAPS Journal. He has more than 50 publications in the field of pharmacokinetics and clinical pharmacology, is co-editor of the 3-volume series Pharmacokinetics in Drug Development published by AAPS Press in 2004 and 2011, and is author of the book Pharmacokinetic-Pharmacodynamic Modeling and Simulation published by Springer in 2006. In 2010, he became an Adjunct Assistant Professor at the Indiana University School of Medicine and the University of North Carolina, Chapel Hill.