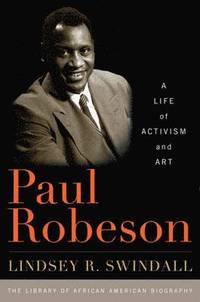 A Life of Activism and Art

av Lindsey R Swindall
Inbunden Engelska, 2013-02-07
719
Köp
Spara som favorit
Skickas inom 10-15 vardagar.
Fri frakt inom Sverige för privatpersoner.
Finns även som
Visa alla 2 format & utgåvor
Paul Robeson: A Life of Activism and Art is the biography of an African American icon and a demonstration of historian Lindsey R. Swindall's knack for thorough, detailed research and reflection. Paul Robeson was, at points in his life, an actor, singer, football player, political activist and writer, one of the most diversely talented members of the Harlem Renaissance. Swindall centers Robeson's story around the argument that while Robeson leaned toward Socialism, a Pan-African perspective is fundamental to understanding his life as an artist and political advocate. Many previous works on Robeson have focused primarily on his involvement with the US Communist Party, paying little attention to the broader African influences on his politics and art. With each chapter focused on a decade of his life, this book affords us a fresh look at his story, and the ways in which the struggles, successes and studies of his formative years came to shape him as an artist, activist and man later on. Robeson's story is one not simply of politics and protest, but of a man's lifelong evolution from an athlete to an entertainer to an indispensible man of letters and African American thought. Swindall neatly outlines the events of Robeson's life in a way that freshly presents him as a man whose work was influenced by more than just his circumstances, but by a spirit rooted in dedication to the African's place in American art and politics.
Visa hela texten

Swindall's concise biography is a great introduction to this iconic African American artist, athlete, and activist. Swindall (Sam Houston State Univ.) contextualizes Robeson's life within larger global, political, and racial spheres, stressing that "the African diaspora, its culture, people and politics, was at the heart of his artistic career and political activism." The author draws heavily on existing secondary sources, including biographies by Martin Duberman (Paul Robeson, 1989) and Paul Robeson Jr. (The Undiscovered Paul Robeson, CH, Sep'01, 39-0207), as well as from earlier works and primary sources, but does not footnote in a traditional academic way. This is problematic at times. Swindall relies heavily on the Daily Worker and other communist or communist-influenced publications, yet fails to identify this political affiliation. While Robeson was certainly the target of rabid political attacks and the mainstream media contributed to this pillorying, a more balanced primary and secondary form of documentation would have added to the work. However, Swindall aptly demonstrates Robeson's remarkable multifaceted career, including politics and his stage and field successes. The author does not shy away from Robeson's psychological problems in the final quarter of his life. Overall, a fine introduction to Robeson that stresses his life as a public figure. Summing Up: Recommended. All levels/libraries. * CHOICE * Paul Robeson truly was a Renaissance man: actor, singer, activist, athlete, scholar. Wildly popular, he was also controversial, but, above all, he was a world citizen, even as he nurtured a deep kinship with Africa and its people. During the Cold War, his outspoken political views and socialist tendencies led the U.S. government to label him a subversive. He even had to wrestle with the State Department over his right to travel overseas. 'He opted for values over comfort; struggle instead of ease,' writes Swindall. In this short but cogent assessment of Robeson's remarkable career, Swindall seeks to demonstrate, which she does with great skill, how 'the African diaspora, its culture, people, and politics, was at the heart of his artistic career and political activism.' She considers his roles in such plays as The Emperor Jones, All God's Chillun Got Wings, Othello, and Show Boat; the invaluable time he spent in Harlem when it was known as 'the Negro capital of the world;' and his fruitful years overseas. A thoughtful discussion of a most complicated and fascinating man. * Booklist * [This book] follows Robeson's remarkable career as an actor and activist, attempting to rescue his contributions to the stage and the political scene from the pall cast over them by a McCarthy Era blacklist. Robeson is most famous for his career as an actor and singer-he starred as the first African-American Othello on Broadway, and as Joe in Show Boat-but he also took a deep interest in politics and social justice. Swindall's accounting is thorough and straightforward. . . .The result is a surprisingly tidy. . . account of a somewhat untidy and certainly exceptional man. * Publishers Weekly * In Paul Robeson, Lindsey R. Swindall. . . . 'aims to demonstrate how the African diaspora, its culture, people, and politics, was at the heart of his artistic career and political activism'. . . .Throughout the book we are also confronted with portraits of the man, who struggled to balance a career, his marriage, and his health. The most compelling elements of Swindall's narrative are in the details - the moments that provide little-known pieces of Robeson's character or struggle, such as his attendance at concerts by Duke Ellington and Ella Fitzgerald, or the requests made by Fidel Castro, Kwame Nkrumah, and Malcolm X to meet with him after his retirement in 1963. * Journal of American History * Swindall does not shy away from dealing with Robeson's extramarital affairs, the tensions in his marriage with Eslanda Goode Robeson, and the dis

Lindsey R. Swindall earned her doctorate in Afro-American Studies at the University of Massachusetts, Amherst, and is a teaching assistant professor in the College of Arts and Letters at Stevens Institute of Technology in Hoboken, New Jersey. She has also written: The Politics of Paul Robeson's Othello and The Path to the Greater, Freer, Truer World: Southern Civil Rights and Anticolonialism, 1937-1955. She is co-editor of American Appetites: A Documentary Reader.