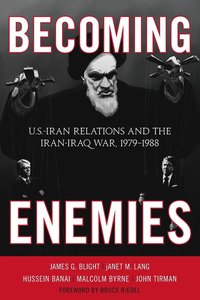 av James G Blight, Janet M Lang, Hussein Banai, Malcolm Byrne, John Tirman
Häftad Engelska, 2014-02-25
389
Köp
Spara som favorit
Skickas inom 7-10 vardagar.
Gratis frakt inom Sverige över 159 kr för privatpersoner.
Finns även som
Visa alla 1 format & utgåvor
Becoming Enemies brings the unique methods of critical oral history, developed to study flashpoints from the Cold War such as the Cuban Missile Crisis, to understand U.S. and Iranian relations from the fall of the Shah in 1978 through the Iranian hostage crisis and the Iran-Iraq war. Scholars and former officials involved with U.S. and UN policy take a fresh look at U.S and Iranian relations during this time, with special emphasis on the U.S. role in the Iran-Iraq War. With its remarkable declassified documentation and oral testimony that bear directly on questions of U.S. policymaking with regard to the Iran-Iraq War, Becoming Enemies reveals much that was previously unknown about U.S. policy before, during, and after the war. They go beyond mere reportage to offer lessons regarding fundamental foreign policy challenges to the U.S. that transcend time and place.
Visa hela texten

[This] book is a very useful source on the Iran-Iraq war, adding a wealth of useful material that was not available before. One of its central themes - that of `missed opportunities' in US-Iranian relations - is also well-taken and critical to an understanding of the topic. * European Political Science * By applying an innovative methodology ("critical oral history"), by engaging some of the most authoritative voices on the subject matter in a well-informed, candid, and insightful dialogue, and through their own trenchant analyses, the authors of this groundbreaking work provide a fresh perspective on the mindsets, misperceptions, and misguided policies by Iran, Iraq, and the United States, that helped start and prolong what became one of the bloodiest regional wars in the latter half of the twentieth century. For policymakers, scholars, and students pondering the causes of the enduring enmities and mistrust between Iran and the United States today, this book is a must read. -- Ali Banuazizi, Boston College and past president, Middle East Studies Association An elegantly written treasure trove of fascinating, forgotten, and previously unrevealed history. For those seeking to understand the roots of modern enmity between the U.S. and Iran, Becoming Enemies is a truly unique and wonderful resource. -- Karim Sadjadpour, Carnegie Endowment A fascinating, eye-opening book about the players and politics of the Iran-Iraq war and the war's domestic and foreign policy repercussions whose effects continue to resonate today. -- Haleh Esfandiari, the Woodrow Wilson International Center for Scholars Becoming Enemies provides a unique and unrivalled insight into the framing of U.S. policy toward the Iran-Iraq war and the roots of the contemporary American-Iranian antagonism. The innovative approach of critical oral history yields penetrating insights into how policy-makers and officials understood events at the time and in hindsight. This book is essential reading for anyone who wants to understand recent U.S. policy in the Middle East. -- Nigel J. Ashton, London School of Economics and Political Science Too often, Americans seem eager to do things rather than to understand things. For those who wish to understand, this book offers invaluable insights about the world's most dysfunctional relationship. By explaining a key episode in the long conflict between Iran and the United States, it presents invaluable insights. Whether Americans are willing to consider them could make the difference between war and peace. -- Stephen Kinzer, author of Crescent and Star: Turkey Between Two Worlds The roots of all of America's current problems with Iraq and Iran lie in our conduct during the Iran-Iraq War. Becoming Enemies provides a profound understanding into that experience. It is a fascinating story, and by presenting it in the words of those who crafted the policy, it gives the reader a rare "fly-on-the-wall" perspective on how American policy gets made, and how the United States got itself into the mess it is in today in the Persian Gulf. -- Kenneth M. Pollack, author of The Persian Puzzle: The Conflict Between Iran and America and Arabs at War: Military Effectiveness, 1948-1991 In this brilliant and disturbing book, America's foreign policy toward the Islamic Republic of Iran in the 1980s is told, for the first time, from deep inside the U.S. decision making apparatus of the Carter and Reagan administrations. It is a sobering tale of Washington's misperceptions, ignorance and arrogance drawing on newly declassified documentation and oral testimony from key participants, who struggle to come to grips with how and why the U.S. rallied behind one of the twentieth century's most brutal despots, Iraq's Saddam Hussein, in his war with Ayatollah Khomeini's Iran, thereby sowing the seeds of bitter U.S.-Iranian enmity that exists to this day. -- Patrick Tyler, former Middle East correspondent for The New York Times and The Washingto

Foreword: By Bruce Riedel. Part I: The U.S. and Iran: How "the Enemy Has Become Our Masterpiece." Prologue: Kierkegaard in the Desert: A Reader's Guide to Becoming Enemies. Dramatis Personae: Who's Who at the Musgrove Conference. Chapter One: How It Came to This: The Evolution of Dueling U.S. and Iranian Narratives. Part II: The Musgrove Conference: A Critical Oral History of the Origins of U.S.-Iranian Enmity. Chapter Two: The U.S. Confronts The Islamic Republic: The Origins of Enmity, 1979-1982. Chapter Three: The U.S. Tilt Toward Iraq: A Strategy for Avoiding a "Middle Eastern Armageddon." Chapter Four: "A World-Class Rogues' Gallery of Liars and Crooks": The Iran-Contra Affair. Chapter Five: "This Huge Crescendo of Pressures": Iraqi Resurgence in 1988 and Iranian Preparation for War with the U.S. Chapter Six: Khomeini Drinks the "Hemlock": How the United Nations Facilitated the End of the War. Part III: Revelations, Perspectives and Interpretations. Chapter Seven: Missed Opportunities? The Virtual History of U.S.-Iran Relations During the Iran-Iraq War. Epilogue: Takeaways: What Did We Learn From the Musgrove Dialogues? Appendix I: Chronology. Appendix II: Annotated Excerpts From Declassified Documents. Credits. Endnotes. Acronyms. Acknowledgments. About the Authors. Index.