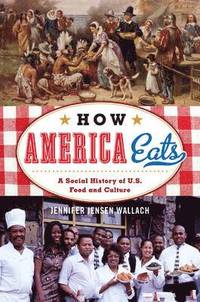 A Social History of U.S. Food and Culture

av Jennifer Jensen Wallach
Inbunden Engelska, 2012-11-21
499
Köp
Spara som favorit
Specialorder (osäker tillgång). Skickas inom 11-20 vardagar.
Fri frakt inom Sverige för privatpersoner.
Finns även som
Visa alla 2 format & utgåvor
How America Eats: A Social History of U.S. Food and Culture, by food and social historian Jennifer Wallach, sheds a new and interesting light on American history by way of the dinner table. It is, at once, a study of America's diverse culinary history and a look at the country's unique and unprecedented journey to the present day. While undeniably a "melting pot" of different cultures and cuisines, America's food habits have been shaped as much by technological innovations and industrial progress as by the intermingling and mixture of ethnic cultures. By studying what Americans have been eating since the colonial era, we are further enlightened to the conflicting ways in which Americans have chosen to define themselves, their culture, their beliefs, and the changes those definitions have undergone over time. Understanding the American diet is the first step toward grasping the larger truths, the complex American narratives that have long been swept under the table, and the evolving answers to the question: What does it mean to be American?
Visa hela texten

There is no question that our food system is fragile and deeply flawed, but few things will frustrate a food scholar as much as the creep into contemporary discussion of 'the way things used to be,' a nostalgic journey to family farms, dinners round the table, consumption in moderation, and 'mom's apple pie,' made with apples so local and ripe that they fell from the tree and rolled to the kitchen door to be picked up by a sturdy farmwife in an unostentatious but immaculate kitchen. [How America Eats shows] that the food and eating of our past was not as Rockwellian as all that and, where it was, it was only for an elite few. . . . Wallach offers a general people's history of food in the U.S., sweeping from the Jamestown settlement in 1607 through to present-day food politics. . . . Wallach dispels myths, reminding the reader, with ample evidence, that nostalgic images of Native Americans and European pilgrims happily dining together around an early Thanksgiving table are pure fiction. A pre-Civil War meal of Southern fried chicken and country ham had as its backdrop blood, disease and sweat; and these foods owe their enduring presence in the modern American diet to hegemony, theft and strife in relation to race, class and gender. . . . Wallach shows how what Americans eat today is drawn from this collective history, arguing in particular that 'American cuisine,' and the culture which surrounds it, originated with the Africans, brought over by slave traders, who combined the foods of their homeland with Native American and European traditions. * Times Literary Supplement * This short but effective overview of US food history provides a synthesis of the growing scholarship about eating and culture. Beginning with Columbian-era practices and concluding with a discussion of contemporary health and environmental issues, Wallach (Univ. of North Texas) connects eating practices to multicultural influences and contextualizes food culture as part of larger US trends. Included are explanations of formerly popular dishes and well-crafted descriptions of who prepared food and the methods they used. A review of technological changes that altered consumption includes examples from well-known food historians such as Harvey Levenstein (e.g., Fear of Food, CH, Nov'12, 50-1434). The discussions of ethnic food practices as critical elements that shaped eating habits will help introduce students to more detailed works, such as those by Donna Gabbacia (e.g., We Are What We Eat, 1998) and Andrew Coe (e.g., Chop Suey, CH, May'10, 47-5209). This book is a fine introduction for students curious about food culture and consumption. Summing Up: Recommended. * CHOICE * In this well-written and highly readable account, Jennifer Wallach succeeds in giving a coherent and scholarly history that ties food practices into larger historical trends and social contexts. Her account recognizes the numerous ironies and contradictions inherent in a society that has wavered since its beginnings between idealistic values and beliefs and the pragmatic necessities of survival. Wallach also explores in detail the histories and significance of selected foods and foodways traditions, making the book appealing to anyone interested in food as well as in American culture. ... Wallach contributes to the small body of scholarly literature that looks at the historical sweep of American food culture and teases out the ways in which struggles over national, group, and individual identity were expressed through food. Perhaps more significantly, she also addresses questions that go beyond the fields of food studies and American studies to demonstrate that understanding the social and cultural contexts of food practices is more than simply an enrichment of our knowledge and enjoyment of food. There were both advantages and disadvantages to the progression of our eating habits; individuals made choices according to what was available to them at the time and according to the worldviews

Jennifer Jensen Wallach is associate professor of history at the University of North Texas. She is the author, most recently, of Richard Wright: From Black Boy to World Citizen.

Introduction Chapter 1: The Cuisine of Contact Chapter 2: Food and the Founding Chapter 3: Foodways in an Era of Expansion and Immigration Chapter 4: Technology and Taste Chapter 5: Gender and the American Appetite Chapter 6: The Pious or Patriotic Stomach Chapter 7: Food Habits and Racial Thinking Chapter 8: The Politics of Food A Note on Sources