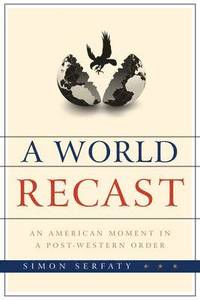 An American Moment in a Post-Western Order

av Simon Serfaty
Inbunden Engelska, 2012-10-12
439
Köp
Spara som favorit
Skickas inom 5-8 vardagar.
Fri frakt inom Sverige för privatpersoner.
Finns även som
Visa alla 1 format & utgåvor
The end of the unipolar moment completes the passing of a Western era that was prolonged for half a century when the United States took over for a defeated and exhausted group of European states after World War II. Distinguished scholar Simon Serfaty vigorously argues that while it is possible, and even desirable, to acknowledge the passing of the Western era, it is exaggerated to present it as an irreversible decline of the West relative to an irresistible rise of the Rest. Rather, he shows that the unfolding post-Western moment will be messy. In addition to the United States and the states of Europe as a Union, the new cast of significant powers will involve a dozen or more countries: emerging powers like China and India, postimperial powers such as Japan and Russia, new influentials like Brazil and Turkey, pivot states like Egypt and Pakistan, nuisance states like Iran, failed or failing states like North Korea and Sudan, and others. Echoes of a Sarajevo moment played out this time in the greater Middle East, the new global Balkans for the twenty-first century. But Serfaty convincingly contends that even during a zero-polar moment of geopolitical transition, American power remains superior, and thus indispensable though no longer decisive; Western power stands on top and thus is inescapable though no longer exclusive; and even as the Rest gains broadly in stature and reach it is unlikely to achieve preponderance any time soon. This powerful and provocative book should be read by all who share a deep concern for the future of America-and a recast world.
Visa hela texten

Against the backdrop of Europe's travails, at a time when the prevailing narrative of international relations is engrossed in the achievements of the emerging powers, this sobering and vivid work, which makes a strong case for the role of the Transatlantic Community in the building of tomorrow's world, should be compulsory reading for policymakers on both sides of the Atlantic. -- Ana Palacio, former foreign minister of Spain Simon Serfaty writes about international politics with a unique combination of insight, clarity, and wit. A World Recast is a dazzling performance from an author at the peak of his powers. -- Tod Lindberg, Editor of Policy Review, Hoover Institution Serfaty (Old Dominion Univ.) argues that while the US and the West are losing their dominant positions in the world, they are not in decline. They are facing a world where rising countries wish to share in control of the international system. Serfaty argues that the next decade will be key for the US and the West, much like the second decade of the 1900s was crucial 100 years ago. The actions the US and the West take today may prevent disorder and war in the future. For this to happen, the US should not turn away from Europe and its transatlantic alliance. The US will also need to be willing to share power, but not just acquiesce to the demands of rising powers. In particular, the US should be willing to confront China but share power with China when called for as well. The strength of the book is Serfaty's analysis of power and who has it. Summing Up: Recommended. * CHOICE *

Simon Serfaty is professor of U.S. foreign policy at Old Dominion University in Norfolk, Virginia. He also serves as senior fellow at the German Marshall Fund of the United States and is the Zbigniew Brzezinski Chair (emeritus) in Global Security and Geopolitics at the Center for Strategic & International Studies (CSIS) in Washington, DC. His many books include, most recently, Vital Partnership and Architects of Delusion.