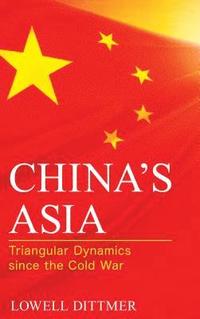 Triangular Dynamics since the Cold War

av Lowell Dittmer
Inbunden Engelska, 2018-02-23
999
Köp
Spara som favorit
Skickas inom 10-15 vardagar.
Fri frakt inom Sverige för privatpersoner.
Finns även som
Visa alla 2 format & utgåvor
This balanced and deeply informed book provides a comprehensive account of China's Asia policy since the Cold War. Lowell Dittmer traces the PRC's policy toward its Asian neighbors in the context of the country's move from a developing nation to a great power, capable of playing a role in world politics commensurate with its remarkable economic rise. The author considers China's bilateral relations with Russia, Central Asia, South and Southeast Asia, and Australia. Each of these relationships is also viewed in terms of China's rivalry with the United States, which has viewed China's rise with admiration tinged with a certain foreboding. Thus, Dittmer employs a triangular analysis to understand Beijing's attempt to expand in Asia while at the same time deterring Washington's interference. Reframing the international relations of Asia in a thought-provoking and informed manner, this important book presents a panoramic view of the dynamics at work on all sides of China.
Visa hela texten

China's Asia is a sophisticated and important examination of China's management of triangular relationships around its periphery. These relationships involve Beijing, one of its Asian neighbors, and the United States. Chinese leader Xi Jinping sees his country's natural role as dominant and views the United States as fighting to undermine or prevent that dominance. Chinese regional policy, therefore, becomes a protracted series of triangular contests with a Washington unreconciled to diminished influence. Beijing may eventually overplay its hand, but these triangular engagements likely will become the energizer of Asia's international politics for decades to come. For the next period, Dittmer argues, 'China is likely to get what it wants.' The question is: At what cost to all involved? -- David M. Lampton, The Johns Hopkins School of Advanced International Studies This is a timely and illuminating study of China's rising role in Asia. From the South Sea Islands to the Belt Road Initiative, we see an increasingly engaged and assertive China. Lowell Dittmer offers a clear and compelling account of the causes and potential consequences of this momentous development. -- Elizabeth J. Perry, Harvard University Following his classic work on the strategic triangle among China, the United States, and the Soviet Union during the Cold War, Lowell Dittmer discovers a new triangle among China, the rest of Asia, and the United States in the post-Cold War world. China's Asia is a remarkable tour de force exploring the evolving foreign policy behavior of China as a rising power in relationships with the major power players in Asia, including the United States, Japan, ASEAN, and Australia, since the end of the Cold War. This is an insightful and a timely work to help us understand how an increasingly powerful China has conducted its foreign relations in the most dynamic area of the world. This lucid yet authoritative book will be of particular interest to students of Chinese foreign policy as well as informed general readers. -- Suisheng Zhao, University of Denver; editor of the Journal of Contemporary China Lowell Dittmer, in his usual clear manner, provides a concise and useful look at the way China views Asia. A very timely work. -- Joseph Fewsmith, Boston University

Lowell Dittmer is professor of political science at the University of California, Berkeley, and editor of Asian Survey.