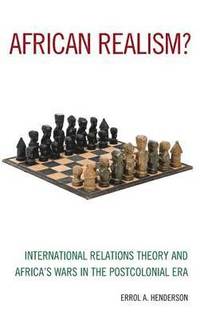 International Relations Theory and Africa's Wars in the Postcolonial Era

This important book challenges prevailing theories of international relations and war. Henderson offers an Afrocentric analysis of conflict behavior of African states since independence, including internal and international wars, informed but not bound by existing theoretical paradigms. In the end, he demonstrates the necessity of testing global theories in regional and other contextual settings and of formulating approaches that do justice to their specific historical, cultural, and institutional conditions. Using a combination of qualitative and quantitative analyses, he contends that African states' conflict behavior is best explained by a 'neopatrimonial balancing thesis' that upends or modifies conventional realist, democratic peace and liberal trade theses, at least insofar as they apply to Africa. The research and policy implications of Henderson's findings are only briefly noted at the end; they certainly invite reconsideration of the ways scholars and policy practitioners frame and formulate their respective approaches to addressing contemporary African conflicts. Highly recommended for college and university libraries and collections supporting African and international studies, peace and conflict programs, and larger public library systems. Summing Up: Highly recommended. Upper-division undergraduates and above. * CHOICE * This is a virtual tour de force of the International Relations field while also serving as a critique of much of its treatment of conflicts and wars in Africa. The author does a thorough job in mainstreaming Africa and elevating its relevance to IR theories. He demonstrates that it is realism rather than liberalism or constructivism that best depicts African approaches to international relations in the post-colonial period. Henderson should be congratulated on taking a bold and consistent stand as he wades through the massive literatures on Africa and IR that reflects his mastery of both. -- Goran Hyden, distinguished Professor emeritus, University of Florida In this well-researched and highly readable book, Errol A. Henderson presents an impressive analysis of the applicability of international relations theory to African interstate conflicts, particularly with respect to the debate concerning the democratic peace thesis (DPT). In challenging some of the established ideas in a field that tends to ignore Africa, African Realism? should appeal to policymakers, as well as to professors and students engaged in graduate seminars in African politics, comparative politics, and international relations. -- Georges Nzongola-Ntalaja, University of North Carolina at Chapel Hill

Errol A. Henderson is associate professor in the Department of Political Science at Pennsylvania State University.