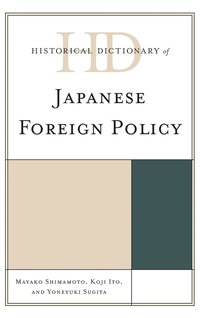 This reference book written by three scholars affiliated with Osaka University in Japan is intended for general audiences. Entries are relatively short, with cross-references bolded in the text or placed at the end. . . .The introduction provides a decent overview of foreign relations starting in 1543, although the book's focus is the late Tokugawa period from the mid-19th century through the 20th century. . . .[T]here is a general chronology and a listing of prime ministers, foreign ministers, and even vice foreign ministers. . . .For libraries collecting comprehensively. * CHOICE * This book would be of most use in libraries serving users who are studying Japanese foreign policy at a basic level, especially those on courses that have the same approach to the subject as its authors. * s *

Mayako Shimamoto is currently an independent scholar. Her current interests cover US atomic diplomacy in the early Cold War, postwar nuclear energy issues in US-Japan relations, and Japan's present-day nuclear policy. She continues to do research on these subjects, while giving talks at universities either in Japan or abroad. Koji Ito is a PhD student of American history at the University of Illinois at Urbana-Champaign. His major works include "The Price of National Prestige: An Interpretation of the Japan-US Confrontation over Hawaii at the Turn of the Century," American Review, Vol. 46 (March, 2012), 33-50, and "Politics in the Dark: An Interpretation of the Japan-US War Crisis over Hawaii in 1897," Doshisha American Studies Supplement, Vol. 20 (April 2013), 53-72. Yoneyuki Sugita is professor of American history at Osaka University. His major works include "US Strategic Preference for Securing Military Bases and Impact of Japanese Financial Community on Constrained Rearmament in Japan, 1945-1954," in Peter N. Stearns ed., Demilitarization in the Contemporary World (Champaign: University of Illinois Press, 2013); Pitfall or Panacea: The Irony of US Power in Occupied Japan, 1945-1952 (New York: Routledge, 2003).