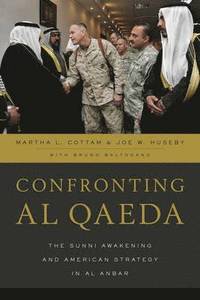 The Sunni Awakening and American Strategy in al Anbar

av Martha L Cottam, Joe W Huseby, Bruno Baltodano
Inbunden Engelska, 2016-03-22
429
Köp
Spara som favorit
Skickas inom 5-8 vardagar.
Fri frakt inom Sverige för privatpersoner.
Finns även som
Visa alla 1 format & utgåvor
Based on in-depth interviews with tribal Sheiks involved in the Awakening and their American military counterparts, Confronting al Qaeda is a study of decision-making processes and the political psychology of the Sunni Awakening in al Anbar. It traces the change in American military strategy that made the Awakening collaboration between the Sunni tribes and the U.S. forces possible. It explains how the evolution of the tribal leaders' perspective and of the American military strategy led to defeat al Qaeda in al Anbar. The process of these changing mutual images is detailed as well as how the cooperation between groups led to further evolution of perceptions. Political and military realities urgently forced these perceptual and social identity shifts initially, but the process of cooperation and engagement accelerated these shifts through increasingly mutually beneficial cooperation and interaction during the battle with al Qaeda in Iraq.
Visa hela texten

Realistic insights...make this book an important contribution to the literature on counterinsurgency. * Perspectives on Terrorism * Confronting Al Qaeda, the Sunni Awakening and American Strategy In Al Anbar is a very short read, and for an academic book doesn't get bogged down in theory. Social Identity and how it relates to Anbar is easy to understand. That makes the book worthwhile for a quick overview of what happened in Anbar. * Musings on Iraq: Iraq News, Politics, Economics, Society * As the conflicts in Iraq and Syria continue, this book provides essential insight into the preceding history and evolution of thinking that is behind them and will need to be dealt with if these conflicts are to be managed and much less resolved. The book is unusual in that it brings to the table interviews with Sunni leaders that have not been considered before and combines a well-grounded theoretical framework with a detailed analysis of the Sunni tribes and their interaction with Saddam Hussein's regime, the American provisional authority, and the Shi'a led Iraqi government. It is a very valuable contribution. -- Richard Herrmann, professor, international relations, international security, and political psychology, The Ohio State University One cannot understand the Islamic State movement without grasping the nature of its historical antibody-the Awakening movement in Iraq. Based on first hand interviews, Cottam and Huseby have written the only first rate analysis I have seen of a movement that sadly no longer exists in a coherent form. -- Craig Whiteside, LTC, USA (Ret), professor of Theater Security Decision Making for the Naval War College at the Naval Postgraduate School.

Chapter 1. Introduction Chapter 2: US Intervention and the Birth of the Insurgency in al Anbar Chapter 3: The Tribes: High Expectations and Disappointment Chapter 4 The Violence Escalates Chapter 5: The Awakening Spreads Chapter 6: Epilogue and Conclusion