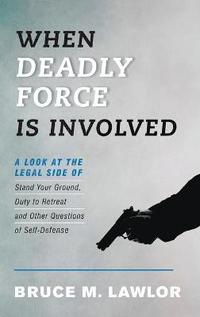 When Deadly Force Is Involved

A Look at the Legal Side of Stand Your Ground, Duty to Retreat and Other Questions of Self-Defense

av Bruce M Lawlor
Inbunden Engelska, 2017-05-17
358
Köp
Spara som favorit
Finns även som
Visa alla 2 format & utgåvor
Self-defense, as a legal concept, is easy to describe but difficult to apply. Generally, a person who is without fault may use reasonable force or defensive force for the purpose of defending one's own life or the lives of others, including, in certain circumstances, the use of deadly force, provided there is no reasonable alternative to avoid it. When someone begins to parse the words of this description, however, he or she runs immediately into a maze of self-defense laws that appear to be at odds with each other. Bruce Lawlor clears up the confusion by identifying the major issues that surface in most self-defense cases and by describing how the law has dealt with them historically. Its purpose is not to provide legal advice, but to illuminate the path that must be taken to decide whether a claim of self-defense is valid. It examines a variety of issues, including the duty to retreat and stand-your ground laws, what is a deadly threat, when is fear of mortal danger reasonable, and even what happens when a person mistakenly shoots some in self-defense. When Deadly Force Is Involved: A Look at the Legal Side of Stand Your Ground, Duty to Retreat and Other Questions of Self-Defense brings a bit of order to the confusion behind self-defense.
Visa hela texten

What justifies the use of lethal force in self-defense? On the surface, it seems to be a simple concept, particularly to laymen; but the question is one of the most complex and thorny legal issues that prosecutors and courts of law can deal with. The right to self-defense is actually perhaps the most narrowly defined of all human rights; that is something that most laymen do not understand even though it is attempted as a defense every day in homicide trials. Bruce M. Lawlor presents an excellent study of the issues involved in self-defense in a clear in understandable manner in When Deadly Force is Involved. It is a book that should be read by every American who owns a gun as it lays out the perceived parameters of that define the justifiable use of lethal force. * The Washington Times * Lawlor, a retired military officer and attorney with a background in security who is also a licensed firearms instructor, presents a straightforward analysis of U.S. self-defense laws by providing a variety of actual cases for readers to consider. By drawing heavily from legal transcripts, Lawlor provides minute-by- minute reviews of the cases, covering the smallest of details that prompted the use of deadly force. From necessity to imminent harm to reasonable force to the now-infamous stand your ground, Lawlor addresses 15 different issues related to self-defense, reviews how cases were or were not prosecuted, and discusses how judges and juries make their decisions. He largely avoids political conclusions, sticking with the facts behind the cases he presents, thus freeing readers from typical gun-related talking points.... Lawlor's dispassionate approach will be appreciated by those interested in learning about the legal aspects of self-defense. * Booklist * When Deadly Force is Involved ... [is] refreshingly innovative in its approach.... What I find most impressive about Mr. Lawlor's methodology and style is that it makes this particular book much more readable and understandable to the average layperson than many texts on self-defense. This is helpful, because most people who carry firearms are not attorneys, and they often express frustration at the complicated legal jargon that can be hard to translate into useful information they can use in their daily lives.... When Deadly Force is Involved is a book that will give anyone who owns and/or carries a firearm an enhanced understanding of how the legal process surrounding a self-defense case actually unfolds in the real world. Understanding these realities can help the reader avoid making some of the more common errors in judgment that have turned what otherwise would have been a legitimate case of self-defense into a conviction for assault, attempted murder, manslaughter or, in extreme cases, 2nd or even 1st degree murder. * USCCA (United States Concealed Carry Association) * A very thought-provoking read. -- Massad Ayoob, Firearms and Self-Defense Instructor, Massad Ayoob Group In this work, Bruce Lawlor traces major themes in defensive force cases through a decidedly pro-gun lens. I found his imaginative reworking of leading cases to be at times both fascinating and even provocative. -- Greg O'Meara, Professor, Creighton University Law School Lawlor brings fresh eyes and angles to the deadly force definitions for self defense. A fascinating read. -- Hanan Yadin, former member of IDF and Israeli General Security Services; tactical and antiterrorism consultant, ISI Training Center Bruce Lawlor uses situations which relate self defense to everyday life. I found this book to be very informative and would recommend it to anyone interested in furthering their knowledge of self defense and the law. -- Larry Akins, former law enforcement firearms instructor and Sheriff's deputy I found this book informative and interesting. It should be read by anyone who thinks he knows something about self-defense. Understanding what Bruce Lawlor has written provides a great awareness of the legal issues

Bruce Lawlor, retired as a Major General from the U.S. Army, has extensive military and civilian experience in the security sector. He works with national, state, local, and private sector executives to enhance organizational and individual security. As an attorney, he represented both police officers and criminal defendants, in civil and criminal litigation, to include arguing successfully a claim of self-defense in a murder case. Mr. Lawlor is a certified firearms instructor, and teaches individual self-defense. He conducted research regarding the rules of engagement for the use of small arms, relating to U.S. Army operations in heavily populated, civilian conflict areas. He is a Harvard National Security Fellow.