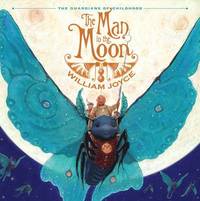 The Man in the Moon

av William Joyce
(1 röst)
Inbunden Engelska, 2012-09-15
189
Köp
Spara som favorit
Skickas inom 7-10 vardagar.
Gratis frakt inom Sverige över 159 kr för privatpersoner.
In the first book of a multibook series, find out how a round, jolly baby became the great white hope of the Milky Way-and ringleader of the Guardians of Childhood. Up there in the sky. Don't you see him? No, not the moon. The Man in the Moon. He wasn't always a man. Nor was he always on the moon. He was once a child. Like you. Until a battle, a shooting star, and a lost balloon sent him on a quest. Meet the very first guardian of childhood. MiM, the Man in the Moon.
Visa hela texten

"A fabulous recapturing of an old, real fairytale world. Dark. Mysterious. Stunning! " --MAURICE SENDAK, Caldecott-winning creator of Where the Wild Things Are "William Joyce, to put it simply, is a genius, and we are lucky to have another book from him. The Man in the Moon is filled with tenderness, love, and enchantment. It's an unforgettable story that will leave readers wanting more...and luckily there IS more, because The Man in the Moon is just the first in the Guardian's of Childhood series, which will, I predict, take their rightful places in the hearts of children everywhere." --BRIAN SELZNICK, author/illustrator of the Caldecott-winning The Invention of Hugo Cabret "Each of William Joyce's books has been more beautifully painted, more magically imagined and more deliciously written than the one that came before. The Man in the Moon is the latest dazzling masterpiece, the one we Joyceans, young and old, have been pining for. It instantly became my children's favorite book." --MICHAEL CHABON, Pulitzer Prize-winning author of The Amazing Adventures of Kavalier & Clay * "Joyce's (A Day with Wilbur Robinson) concoction, the inaugural offering in the Guardians of Childhood series (with films and 12 books to follow), is a rich, cinematic brew of steampunk fancies. His sumptuous spreads are crowded with rotund telescopes, Jules Verne rocket ships, and sherbet-bearing robots, all painted in a superb palette of indigo and gold. The infant Man in the Moon (named for the Moon Clipper, an extraterrestrial airship that disguises itself as a moon at night) is hidden away by his parents in order to escape the nefarious Pitch, "the King of Nightmares," renowned for "plundering planets, extinguishing stars, and scuttling every airship that crossed his path." Without his parents, but amply provided for, the acronymically nicknamed MiM grows up, round-faced and nattily dressed, orbiting Earth in the derelict clipper ("It was now just a moon"). Learning of the hopes and dreams of Earth's children, he gathers a team of fellow guardians to protect and console them. Joyce combines elemental fairyland themes--a cloistered heir, secret powers, mysterious good deeds--into a tale that's warm and fuzzy, swashbuckling, and dazzlingly inventive all at the same time." - Publishers Weekly 7/4/11 *Starred Review* * "William Joyce invents a breathtaking landscape for his history of the original guardian of childhood: the Man in the Moon. As a baby, MiM, as he is called, travels the skies in a golden-sailed Moon Clipper with his mother, father and Nightlight, a kind of fairy godfather. Each night, the vessel transforms into the Moon. One day, Pitch, the King of Nightmares, with jet-black hair in up-floating coils as menacing as Medusa's snakes, hunts down this legendary child who has never had a bad dream. Nightlight whisks MiM away to safety, just before Pitch captures the child's parents. As Nightlight plunges his diamond dagger into Pitch's heart, an explosion results, and when MiM later reaches the Moon's surface, he sees the image of his parents etched in the stars. Their constellation offers MiM comfort, and the moon creatures rally around to educate and protect the baby. Joyce's fans will relish the parallels with his earlier tour de force about a mythic man in a magical land, Santa Calls. Santa rides in his sleigh; MiM flies on his moth. Santa learns of children's wishes through letters; their hopes and dreams travel to MiM by helium balloons. When MiM comes up with a solution to children's nighttime fears, he recruits the Moon's minions and his team of earthling Guardians (Santa, the Tooth Fairy, etc.). Pitch and Nighlight's fates will be the subject of subsequent episodes, but this first adventure in the Guardians of Childhood series offers a visual feast and a complete mythology of the Man in the Moon." --Jennifer M. Brown, children's editor,

William Joyce does a lot of stuff but children's books are his true bailiwick (The Guardians series, Dinosaur Bob series, George Shrinks, and the #1 New York Times bestselling The Fantastic Flying Books of Mr. Morris Lessmore, which is also his Academy Award-winning short film, to name a few). He lives in Shreveport, Louisiana. Talk to William Joyce and see upcoming work at @HeyBillJoyce on Twitter and Instagram.