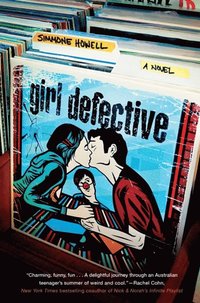 av Simmone Howell, Henry Beer
E-bok (EPUB - DRM), Engelska, 2014-09-02
129
Den här boken kan endast laddas ned av privatpersoner.
Ladda ned
Spara som favorit
Laddas ned direkt
Läs i vår app för iPhone, iPad och Android
In the tradition of High Fidelity and Empire Records, this is the literary soundtrack to Skylark Martins strange, mysterious, and extraordinary summer.This is the story of a wild girl and a ghost girl; a boy who knew nothing and a boy who thought he knew everything. Its a story about Skylark Martin, who lives with her father and brother in a vintage record shop and is trying to find her place in the world. Its about ten-year-old Super Agent Gully and his case of a lifetime. And about beautiful, reckless, sharp-as-knives Nancy. Its about tragi-hot Luke, and just-plain-tragic Mia Casey. Its about the dark underbelly of a curious Australian neighborhood. Its about summer, and weirdness, and mystery, and music. And its about life and death and grief and romance. All the good stuff.
Visa hela texten