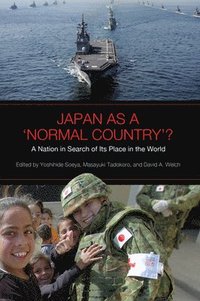 Japan as a 'Normal Country'?

A Nation in Search of Its Place in the World

av Yoshihide Soeya, David A Welch, Masayaki Tadokoro
Häftad Engelska, 2011-06-11
269
Köp
Spara som favorit
Skickas inom 7-10 vardagar.
Fri frakt inom Sverige för privatpersoner.
Finns även som
Visa alla 2 format & utgåvor
For decades, Japan's foreign policy has been seen by both internal and external observers as abnormal in relation to its size and level of sophistication. Japan as a 'Normal Country'? is a thematic and geographically comparative discussion of the unique limitations of Japanese foreign and defence policy. The contributors reappraise the definition of normality and ask whether Japan is indeed abnormal, what it would mean to become normal, and whether the country can-or should-become so. Identifying constraints such as an inflexible constitution, inherent antimilitarism, and its position as a U.S. security client, Japan as a 'Normal Country'? goes on to analyse factors that could make Japan a more effective regional and global player. These essays ultimately consider how Japan could leverage its considerable human, cultural, technological, and financial capital to benefit both its citizens and the world.
Visa hela texten

'This is a superb volume that anyone interested in today's key debate about Japanese foreign policy must read.' -- Paul Midford Pacific Affairs, vol 86:01:2013

Introduction: What is a 'Normal Country'? by Yoshihide Soeya, Masayuki Tadokoro, and David A Welch * Embracing Normalcy: Toward a Japanese 'National Strategy' by David A Welch (University of Waterloo) * Change and Continuity in Japan's 'Abnormalcy': An Emerging External Attitude of the Japanese Public by Masayuki Tadokoro (Keio University) * A'Normal' Middle Power: Interpreting Changes in Japanese Security Policy in the 1990s and After by Yoshihide Soeya (Keio University) * Conservative Conceptions of Japan as a 'Normal Country': Comparing Ozawa, Nakasone, and Ishihara by Cheol Hee Park (National Graduate Institute for Policy Studies) * Chinese Discourse on Japan as a 'Normal Country' by Jianwei Wang (University of Wisconsin) * The Limits to 'Normalcy': Japanese-Korean Post-Cold War Interactions by by John Swenson-Wright (University of Cambridge) * Japan's Relations with Southeast Asia in the Post-Cold War Era: 'Abnormal' No More? by Peng Er Lam (National University of Singapore)