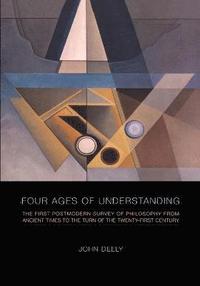 av John Deely
Häftad Engelska, 2011-10-13
504
Köp
Spara som favorit
Skickas inom 10-15 vardagar.
Gratis frakt inom Sverige över 159 kr för privatpersoner.
Finns även som
Visa alla 2 format & utgåvor
This book redraws the intellectual map and sets the agenda in philosophy for the next fifty or so years. By making the theory of signs the dominant theme in Four Ages of Understanding, John Deely has produced a history of philosophy that is innovative, original, and complete. The first full-scale demonstration of the centrality of the theory of signs to the history of philosophy, Four Ages of Understanding provides a new vantage point from which to review and reinterpret the development of intellectual culture at the threshold of "globalization". Deely examines the whole movement of past developments in the history of philosophy in relation to the emergence of contemporary semiotics as the defining moment of Postmodernism. Beginning traditionally with the Pre-Socratic thinkers of early Greece, Deely gives an account of the development of the notion of signs and of the general philosophical problems and themes which give that notion a context through four ages: Ancient philosophy, covering initial Greek thought; the Latin age, philosophy in European civilization from Augustine in the 4th century to Poinsot in the 17th; the Modern period, beginning with Descartes and Locke; and the Postmodern period, beginning with Charles Sanders Peirce and continuing to the present. Reading the complete history of philosophy in light of the theory of the sign allows Deely to address the work of thinkers never before included in a general history, and in particular to overcome the gap between Ockham and Descartes which has characterized the standard treatments heretofore. One of the essential features of the book is the way in which it shows how the theme of signs opens a perspective for seeing the Latin Age from its beginning with Augustine to the work of Poinsot as an indigenous development and organic unity under which all the standard themes of ontology and epistemology find a new resolution and place. A magisterial general history of philosophy, Deely's book provides both a strong background to semiotics and a theoretical unity between philosophy's history and its immediate future. With Four Ages of Understanding Deely sets a new agenda for philosophy as a discipline entering the 21st century.
Visa hela texten

'This magisterial conspectus, nothing less than John Deely's Summa semioticae, attends to the lofty sweep of Western philosophy from its foundations to the threshold of, and across to, the new millennium. In some sense, the book reminds me of Bertrand Russell's History of Western Philosophy, but, whereas Russell situated his chronicle within the context of political and social circumstances from the earliest times to the mid-1940s, Deely is bent on reconfiguring this same progression and beyond by inseparably intertwining it with the doctrine of the sign -- a story hitherto revealed only in fragmentary fashion. Deely's masterpiece is destined to become an indispensable work of reference for all students of semiotics.' Thomas A. Sebeok, Distinguished Professor Emeritus of Linguistics and Semiotics at Indiana University; and Honorary Fellow of Victoria College, University of Toronto

John Deely has been a Professor of Philosophy since 1976 at Loras College in Dubuque, Iowa, and is now at the University of St. Thomas in Houston, Texas.