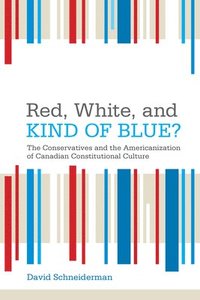 Red, White, and Kind of Blue?

The Conservatives and the Americanization of Canadian Constitutional Culture

av David Schneiderman
Häftad Engelska, 2015-09-18
329
Köp
Spara som favorit
Specialorder (osäker tillgång). Skickas inom 11-20 vardagar.
Fri frakt inom Sverige för privatpersoner.
Finns även som
Visa alla 3 format & utgåvor
Situated between two different constitutional traditions, those of the United Kingdom and the United States, Canada has maintained a distinctive third way: federal, parliamentary, and flexible. Yet in recent years it seems that Canadian constitutional culture has been moving increasingly in an American direction. Through the prorogation crises of 2008 and 2009, its senate reform proposals, and the appointment process for Supreme Court judges, Stephen Harper's Conservative government has repeatedly shown a tendency to push Canada further into the US constitutional orbit. Red, White, and Kind of Blue? is a comparative legal analysis of this creeping Americanization, as well as a probing examination of the costs and benefits that come with it. Comparing British, Canadian, and American constitutional traditions, David Schneiderman offers a critical perspective on the Americanization of Canadian constitutional practice and a timely warning about its unexamined consequences.
Visa hela texten

'Highly recommended.' -- G. A. McBeath Choice Magazine vol 53:11:2016 "Red, White and Kind of Blue? is crisp and unnerving. It suggests Parliament is so malleable, and many of its participants so weak, it dispensed with ancient checks and balances without a shot being fired." -- Holly Doan Blacklocks Reporter, October 10, 2015 "By providing a provocative discussion of contemporary issues and analysis of constitutional reform, Red, White and Kind of Blue is a worthy read. As for its core argument, the book should succeed in spurring a useful debate about Canada's constitutional culture as well." -- Emmett MacFarlane, The Literary Review of Canada, March 2016

David Schneiderman is a professor in the Faculty of Law at the University of Toronto.