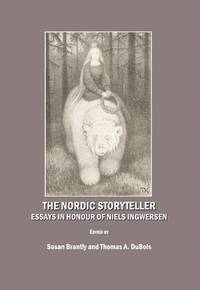 Essays in Honour of Niels Ingwersen

"The Nordic Storyteller offers a cornucopia of articles with a considerable historical range. We learn not only about saints, black books, strong wives, lumberjacks and hygiene, and about the role of storytellers across the Nordic region, but also about the rich cross-pollination between folklore and modern literature."-Karin Sanders, University of California at Berkeley."The serious engagement in these essays with questions of nationalism, colonialism, representations, cultural history, folklore methodology, and film studies-- all treated with the sort of sensible and sensitive approach characteristic of the man to whom they are dedicated-- make this anthology an important contribution to scholarship on the Nordic region specifically, as well as to the humanities more generally."-Steven Mitchell, Harvard University

Susan Brantly received her Ph.D. from Yale University in 1987. She is a professor of Scandinavian Studies at the University of Wisconsin-Madison. Her books include The Life and Writings of Laura Marholm and Understanding Isak Dinesen. She has written several articles on contemporary Swedish historical fiction by writers such as P.C. Jersild, Sven Delblanc, Sara Lidman, Per Anders Fogelstroem and others.Thomas A. DuBois holds a Ph.D. in Folklore and Folklife from the University of Pennsylvania. He teaches in the Department of Scandinavian Studies at the University of Wisconsin-Madison. His books include Finnish Folk Poetry and the Kalevala, Nordic Religions in the Viking Age and Lyric, Meaning and Audience in the Oral Tradition of Northern Europe. With Leea Virtanen he co-authored Finnish Folklore, and he has edited a collection of articles entitled Sanctity in the North: Saints, Lives, and Cults in Medieval Scandinavia.