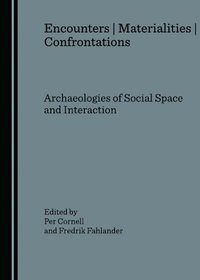 Archaeologies of Social Space and Interaction

Ladda ned
Spara som favorit
Ladda ned och läs i en e-boksläsare. Tips på appar
This collection of texts is a first step towards providing a theoretical and methodological platform for the study of social encounters. The social encounter is a particular sort of concept, focusing on confusion, tension, trauma, and possibly social change that may emerge in situations of contact when people and things interact. A social encounter is, however, not only about negotiation or contemplating existence, but is rather about what happens when people interact actively, when they involve themselves with people and materialities, when they move around, fetch things, use things, leave things etc. The repeated social encounter is often a confrontation with something, such as an opinion, a performance, or with materialities and the effects are often unpredictable. Encounters may reproduce a social pattern, but also contain potential for transformation and change. Such varied responses to encounters will certainly have effects on the archaeological record. The primary focus of the volume is the effects and processes involved in intra- and inter-societal encounters. The collection hence fills a theoretical and methodological gap in the study of the encounter in archaeology. There is a need for elaborating aspects of postcolonial theory in order to develop new ways of approaching the archaeological record. The articles of this volume include examples from various regions and time periods. They range from Scandinavian Stone Age, through Buddhist social practices of the first millennium AD, Maya warfare and ideology, to Aboriginal-European encounters in 20th century Australia.Per Cornell (PhD, Ass. Prof.) is currently lecturer at the Department of archaeology, University of Gothenburg. Cornell has been involved in extensive field-work in Latin America and current research topics include settlement archaeology, formation processes and social theory. Among his recent books are Local, Regional, Global, co-edited with Per Stenborg (Gotarc, 2004).
Visa hela texten