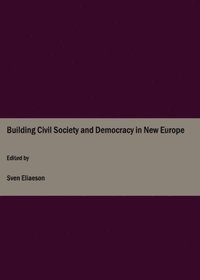 av Sven Eliaeson
E-bok (PDF - DRM), Engelska, 2009-03-26
799
Ladda ned
Spara som favorit
Laddas ned direkt
Läs i vår app för iPhone, iPad och Android
The European enlargement process culminating in 2004 was - as a follow-up to die Wende and the implosion of the Russian empire - an event of the same magnitude as 1815 and 1919. Like 1918-19, it was an &quoteexit into history&quote, a momentous event in post-Westphalian Europe. Even if acceptance of ten new countries was premature, it was appropriate to the moment history provided. The presence of the &quoteNew kids on the block&quote meant both problems and prospects. The end of the cold war meant the fall of the iron curtain - but a mental remnant of the curtain remains, in terms of attitudes regarding civility, corruption, and transparency, and expectations for democratic politics. Several of the &quotenew&quote countries are &quotelate children of 1848&quote. For them, entering NATO was more important than joining the EU, and also preceded EU-membership. Poland is bigger than the other 2004 countries together and has a heavy historical legacy. It is - as Germany used to be - imprinted by its special path between East and West and fear of being encircled by enemies. Although the Building of Civil Society and Democracy in countries in transformation can draw on experiences from the countries already within the EU, there is no primrose path for EU-integration. It is, moreover, an irony that the new member states, as a result of the expectations for post-Communist politics, build institutions of a kind that are no longer sufficiently efficient for &quoteold&quote Europe. The new countries became a full-scale experiment in rule by experts: now by neo-liberals instead of Communists. A common European public sphere and civil society might emerge, but its form remains visible only at the horizon.
Visa hela texten