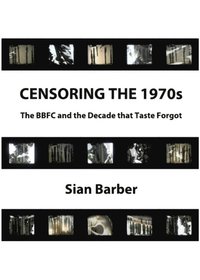 The BBFC and the Decade that Taste Forgot

av Sian Barber
E-bok (PDF - DRM), Engelska, 2011-09-22
679
Ladda ned
Spara som favorit
Laddas ned direkt
Läs i vår app för iPhone, iPad och Android
Finns även som
Visa alla 1 format & utgåvor
This book explores the work of the British Board of Film Censors in the 1970s. Throughout the decade this unelected organisation set standards of acceptability and determined what could and what could not be shown on British cinema screens. Controversial texts like A Clockwork Orange (1971), Straw Dogs (1971), The Devils (1971) and Life of Brian (1979) have been used to draw attention to the way in which the BBFC operated in the 1970s. While it is true to say that these films encountered major classification problems, what of the hundreds of other films being classified at the same time? Did all films struggle with the British censors in this period, and can these famous examples be fitted into broader patterns of censorship policy and practice? In studying over 250 film files from the BBFC archive, this work reveals how 1970s films such as Vampire Circus (1971), Confessions of a Window Cleaner (1974) and Carry on Emmannuelle (1978) also ran into trouble with the film censor. This work explores the complex process of negotiation and compromise which affected all film submissions in the 1970s and the way in which the BBFC actively, and often sympathetically, negotiated with film directors, producers and distributors to assign the correct category to each film. The lack of any defined formal censorship policy in this period allowed the BBFC to work alongside the film industry and push cultural, social and artistic boundaries; however it also left the Board open to accusations of favouritism, subjectivity and personal bias. This work is not simply a study of controversial films and contentious issues, but rather engages with wider issues of changing permission, legal struggles, the influence of the media and the legislative and governmental controls which both helped and hindered the BBFC in this important post-war decade. The focus on historical and archival research offers a great deal to scholars from associated disciplines including history, social policy, media and communictaions and politics.
Visa hela texten