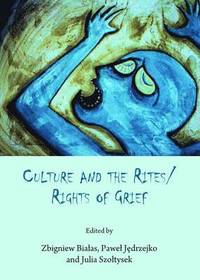 Culture and the Rites/Rights of Grief

av Zbigniew Bialas, Pawel Jedrzejko, Julia Szoltysek
Inbunden Engelska, 2013-10-10
1049
Köp
Spara som favorit
Skickas inom 5-8 vardagar.
Fri frakt inom Sverige för privatpersoner.
Finns även som
Visa alla 1 format & utgåvor
Although generally resented and deemed unfavourable for individuals, societies and nations, grief, grievance, and grieving, along with a complex list of epithets that could, under varying circumstances, accompany them - racial grief, political grievance, protracted grieving, chronic grief, traumatic, unresolved grievance - nevertheless occupy a significant place in culture and its manifestations in literature, art, history, science, and politics.Culture and the Rites/Rights of Grief offers an intellectual excursion into realms of potentially regenerative problematics, too frequently dismissed without due consideration. In this light, the volume constitutes a weighty contribution to the field of literary and cultural studies. First and foremost, however, Culture and the Rites/Rights of Grief is to be intellectually enjoyed by readers with an interest in present-day literary, cultural and political phenomena, at the intersection of which grief and grieving execute an imposing presence, albeit one that remains as indeterminate and flitting as the nature of contemporary cross-cultural and cross-disciplinary encounters.
Visa hela texten

Zbigniew Bialas is Professor of English and Head of the Postcolonial Studies Department at the University of Silesia, Katowice, Poland. He was Alexander von Humboldt Research Fellow in Germany and Fulbright Senior Fellow in the USA. His books include Post-Tribal Ethos in African Literature (1993), Mapping Wild Gardens (1997) and The Body Wall (2006). He is the author of two novels, Korzeniec (2011) and Puder i pyl (2013). Korzeniec was awarded "Silesian Literary Laurels", won the title of "Best Polish Prose of 2011" and was turned into a prize-winning theatrical play. Professor Bialas has edited and co-edited twelve academic volumes, wrote over sixty academic essays and translated English, American and Nigerian literature into Polish.Pawel Jedrzejko, PhD, DLitt, is Associate Professor of American Studies at the University of Silesia in Katowice, Poland, and specializes in the literature, aesthetics and philosophical thought of the so-called "American Renaissance." The primary areas of his research are Melville studies, postcolonial approaches to the cultural history of the West, race studies and literary and cultural theory. He is a co-founder and co-editor of the Review of International American Studies and serves as Associate Editor to Er(r)go: The Journal of Theory, Literature and Culture. Julia Szoltysek is currently completing her doctoral dissertation at the University of Wroclaw, Poland. Her academic interests include postcolonial theory, travel discourses, museum studies, and literary representations of the Middle East. She has published articles and reviews in Polish and international scholarly journals, and her texts have appeared in monographs and refereed volumes published by Peter Lang, Routledge-Taylor and Francis, and Cambridge Scholars Publishing.